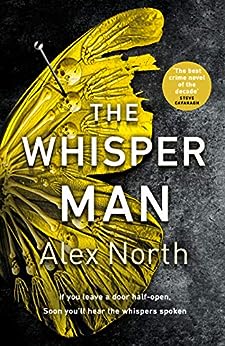 If you leave a door half-open, soon you’ll hear the whispers spoken…

Still devastated after the loss of his wife, Tom Kennedy and his young son Jake move to the sleepy village of Featherbank, looking for a fresh start.

But Featherbank has a dark past. Fifteen years ago a twisted serial killer abducted and murdered five young boys. Until he was finally caught, the killer was known as ‘The Whisper Man’.

Of course, an old crime need not trouble Tom and Jake as they try to settle in to their new home. Except that now another boy has gone missing. And then Jake begins acting strangely.

He says he hears a whispering at his window…

‘The Whisper Man’ has had a lot of rave reviews on social media and in the printed media.  I read the synopsis for ‘The Whisper Man’ and it certainly appealed to me.  I was a bit bothered in case the book didn’t live up to all the hype.  Well I needn’t have worried because it lived up to its hype and then some.  ‘The Whisper Man’ is a belter of a book.  I absolutely chuffing well adored reading ‘The Whisper Man’ but more about that in a bit.

The characters in this book are a curious bunch.  The first two main characters are Tom Kennedy and his adorable sounding son Jake.  Both are recovering from the loss of Tom’s wife and Jake’s mother.  Both are still grieving and Tom would do anything to take Jake’s pain away.  In a way, both are keeping their true feelings buried.  In an attempt to make a fresh start, Tom and Jake move to a new house.  However when they move into this new house, things start to go wrong.  I don’t really want to type too much more about what happens as I would hate to spoil the book for anybody.  Then we have an emotionally damaged male detective, who tries to hide his emotions and he tries not to let his emotions affect his work, although that isn’t always possible.  Last but not least, we have a psychopathic and twisted serial killer.  I must say that when parts of the book focused on him, the hairs stood up on the back of my neck and he made my skin crawl.  I certainly didn’t believe a word he said.  If I could have jumped inside the pages of the book to accidentally on purpose deal with him once and for all then I would have done.  All of the aforementioned characters come together and have a significant role in the story as it pans out.

Oh my flipping (not the word I was thinking but as my Mam might read this, I had better not use the ruder version of the word) goodness gracious me, ‘The Whisper Man’ was one hell of a read and then some.  As soon as I began to read, I became so wrapped up in the story that I lost all track of time.  Usually I have the attention span of a gnat and I am easily distracted but not in this case.  My sole focus was on the book.  In fact I was concentrating that hard on the book that the world could have ended and I wouldn’t have noticed.  It didn’t take me long at all to get into this book and to become addicted to the story.  In fact I would go so far as to say that by the time I got to the bottom of the first page, I was addicted to the story and my plans for the rest of the day were thrown out of the window.  It would have needed something major to prise this book out of my hands.  Woe betide the person who had tried to take the book out of my hands.  My response would not have been pleasant!  ‘The Whisper Man’ wasn’t exactly glued to my hands but it might as well have been because it came everywhere with me.  It was as if I feared that by putting the book down I would have broken the hold that the book had over me and that I might have missed something.  I am very nosy by nature and if there is gossip to be had then I will be right there.

The author’s writing style is superb.  He grabs your attention from the start and he dangles enough bait in front of you to encourage you to read on.  Yes, ‘The Whisper Man’ is primarily a crime novel but at the same time it also has elements of the horror story about it.  Alex North has the ability to make you switch emotions at the drop of a hat.  I found that certain parts of the book made me sad and then next minute I would be feeling frightened and the hairs on the back of my neck stood up.

Reading ‘The Whisper Man’ was much like being on one seriously scary and unpredictable rollercoaster ride with several twists and turns along the way.  There were also a fair few surprises in the story- some I predicted and some that crept up on me and then bam hit me like a punch to the gut, knocking the breath out of me.  Whilst reading this book I felt my blood pressure rise, my heart pound and I kept holding my breath in anticipation of what was going to happen next in the book.

In short, ‘The Whisper Man’ certainly lives up to all the hype.  The book had me on the edge of my seat throughout and I was gripped by the story all the way through.  I can’t wait to read what Alex North comes up with next.  Here’s hoping that we don’t have too long to wait.  I would definitely recommend this book and this author to other readers.  The score on the Ginger Book Geek board is a very well deserved 5* out of 5*.