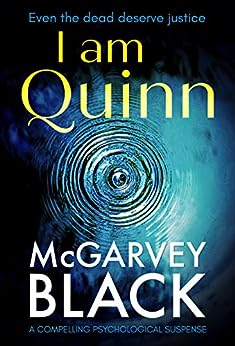 My name is Quinn Roberts and I was murdered.

Quinn Roberts is dead and she wants to know how it happened. She’s angry, confused and disappointed that her life is over. Most of her friends have moved on and it seems like no one cares who was responsible. Her adult children are in shock but their mother’s death is too painful, so they do nothing.

Soon after her murder, Quinn’s husband, Alec, acquires a new wife and Quinn becomes a distant memory. Only her sister, Erin, and Detective John McQuillan continue to search for answers.

But as the case stalls, the formal investigation is moved to the Cold Case division and Quinn’s family loses hope that there will ever be an arrest.

Can Quinn get the justice she deserves? And, is discovering the truth always worth it?

If there’s one thing this Ginger Book Geek likes, it’s discovering new authors.  McGarvey Black is certainly a new author to me and she is certainly not somebody I am going to forget in a hurry.  I read the synopsis for ‘I Am Quinn’ and it intrigued me somewhat.  It sounded like just the creepy sort of read that I enjoy and so without further ado I started reading as soon as I could.  Having now finished reading the book, my initial thought is ‘wow’.  I absolutely loved reading ‘I Am Quinn’ but more about that in a bit.

The main character is a lady called Quinn, who loses her life in mysterious circumstances.  Certain people think she has actually done what she set out to do and killed herself, whilst others are not so sure and they think that there is more to her death than initially meets the eye.  I am not going to tell you anything else about the manner of Quinn’s death as that would give too much away and I would hate to spoil the book for anybody.  I wasn’t exactly sure what to make of Quinn to start with but by the end of the book I felt as though I had got to know her fairly well.  Although she passes away, she is still around and sees how hard certain people take her death and how others don’t seem to mourn her passing at all.  As the book continues we get an idea of what stage of life Quinn was actually at and what she hoped for the future.  I have to say that there were characters in this book that I could quite cheerfully have poked in the eyes with a very sharp stick or slapped them about the face with a wet flannel.  Certain characters made my temper rise and my fists curl into fists.

‘I Am Quinn’ has to be one of the most unique books I have ever had the pleasure of reading and it will stay fresh in my memory for a very long time to come.  I was hooked on this book pretty much by the time I got to the end of the first page.  I just had to keep reading to discover the truth about Quinn’s passing and to see how the story panned out.  The more I read, the further into the story I got and then the more I wanted to read.  I picked the book up only intending to read a couple of chapters but because I couldn’t put the book down, I was still sat there reading a dozen chapters later.  My Kindle wasn’t glued to my hand but it might as well have been because it literally came everywhere with me.  The story seemed to have a hold over me and I feared that if I had to put the book down for any reason then I would break the hold the book had over me.  It was as if I had been hypnotised by the book in a sense.

For me, ‘I Am Quinn’ is brilliantly written and in fact it has to be one of the best written books I have read so far this year.  The story is told from the different points of view of the different characters and there are occasional chapters from the point of view of Quinn both before and after she dies.  I was a bit concerned as to whether or not this way of telling the story would work but I needn’t have worried because it worked brilliantly and the story flowed seamlessly.  The author has one of those writing styles that is easy to get used to and easy to get along with.  In fact I loved her writing style because she made me feel as though I was part of the story myself and not just a nosy observer.  The author certainly has a way of grabbing your attention from the start and she dangles enough bait to keep you interested all the way through the book.  That’s what happened to me anyway.  There were a few twists to the tale but I don’t want to go into them for fear of spoiling the book for other readers.

In short, I adored reading ‘I Am Quinn’ and I can’t wait for McGarvey’s second book to hit the shelves.  I will definitely be first in the queue on release date.  I would definitely recommend that you read this book.  The score on the Ginger Book Geek board is a very well deserved 5* out of 5*.