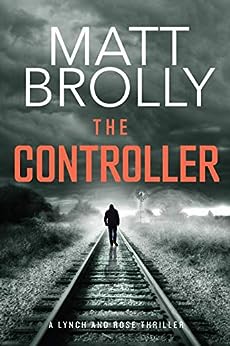 It is six years since special agent Samuel Lynch left the FBI following the disappearance of his son, Daniel. Lynch believes an underground organisation known as The Railroad is responsible and has never stopped searching.

When Special Agent Sandra Rose investigates a house invasion gone wrong, she discovers the assailant has the legendary, and infamous, Railroad tattoo carved onto his back and he claims to know Daniel’s whereabouts.

Rose draws Lynch in to her case, and together they become embroiled in an unparalleled world of violence and evil.

It seems that to see his son again, Lynch will have to confront his greatest fear and face the ultimate test: an encounter with the Railroad’s enigmatic and deadly leader, The Controller.

I have been a fan of Matt’s for a while now.  In fact I have been a fan of his ever since I picked up a copy of the first book to feature Detective Chief Inspector Mike Lambert, which is called ‘Dead Eyed’.  I read the synopsis for ‘The Controller’ and it sounded right up my street.  I love crime thrillers and especially those that feature the FBI.  I may have a bit of an obsession with the FBI and I even tried to join but they didn’t want me because I was too old.  Anyway enough of my ramblings and back to the review I do go.  I couldn’t wait to dive in and I just knew that I would instantly love the book, as I have done with the rest of Matt’s books.  Boy oh boy I was not wrong.  I absolutely loved reading ‘The Controller’ and I loved meeting a new hero as it were but more about that in a bit.

What can I say about former special agent Samuel Lynch?  Well apart from the fact that he is now my favourite type of action hero, although he would hate to be described as such.  Move over Jack Reacher, there’s a new kid in town.  You can keep Jack Reacher because I have Samuel Lynch.  Lynch was in the FBI but left following an incident during which his son was abducted.  Since then Lynch has lived in the wilderness and kept away from most people.  It’s as if he has shut himself away and he wants to live in solitary.  I did wonder if he was trying to punish himself for the fact that his son was abducted.  A case comes along and the suspect will only talk with Lynch himself and claims that he has important information about his son.  Of course Lynch cannot pass up the opportunity to discover more about his son’s fate but he resents having to leave his safe haven and he does not want to become part of the FBI again.  It’s obvious that Lynch is a damaged man and he is hurting badly.  He is feisty, determined, stubborn, strong willed, super intelligent (well I think that he is anyway), cunning, sly, devious and he has a conscience.  What more could you wish for in a hero?

Oh my giddy aunt, who needs the adrenaline rush of watching a ‘Bond’ movie when I get the adrenaline rush of reading ‘The Controller’?  I was gripped by the story from the very first word on the very first page and it was as if the book developed a very strong hold over me, which was impossible to break.  If anybody had tried to prise the book out of my hands, then they would have been sent packing after being pelted with whatever I might have had in my hands (apart from the book of course).  The book came everywhere with me.  My Kindle wasn’t exactly glued to my hand but it might as well have been.  I feared that if I put the book down then I would break the hold that the book had over me and I would miss something.  I tried to ration how much I read in one go but that soon went out of the window because I was enjoying the author’s writing style, the characters (especially Lynch) and the storylines so much that I just couldn’t stop reading.  I seemed to charge through the book at speed and I was most disappointed when I finished the book.  I don’t mean that in a negative way- I was enjoying the book so much that I didn’t want it to end.

For me, ‘The Controller’ is brilliantly written with gripping storylines and stellar characters.  The author has one of those writing styles that really makes you feel part of the story yourself.  The story certainly gets going with a bang and the pace doesn’t let up from there.  At times I had to take a moment to pause to gather my thoughts and then off the action would go again.  Reading this book was much like being on a scary and unpredictable rollercoaster ride with more twists and turns than you could count on two hands.  There were times when I almost had to read through my fingers because I feared what was going to happen next.

In short, I adored reading ‘The Controller’ and I cannot praise it highly enough.  I can’t wait to read the next book in the series.  I wholeheartedly recommend this book and this author to other readers.  The score on the Ginger Book Geek board is a very well deserved 5* out of 5*.