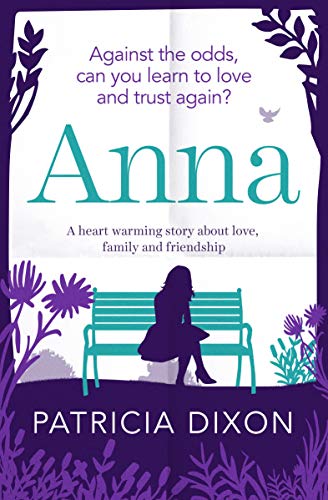 Against the odds, can you learn to trust and love again?

Set on the coast of Portsmouth and the beautiful Loire Valley, this is the story of Anna. A married mother of three, the unremarkable rock of her family is content with her life until she discovers that Matthew, her husband of 22 years, is having an affair.

Consumed by hurt and tainted memories, Anna’s life is turned upside down by first betrayal and then loss. Her confidence totally destroyed, she is tormented by the spectre of Matthew’s unknown lover. Whilst keeping the secret of his affair from her family, Anna must find her way through the pain alone.

With one son on the other side of the world, another about to enter a war zone and her daughter off to university, Anna’s life gradually begins to crumble until someone from her past appears.

I have read a couple of Patricia’s books and I have loved them.  I am slowly but surely getting up to date with her other books.  I read the synopsis for ‘Anna’ and it sounded like an interesting read and so I had to start reading straight away.  Oh my word, it’s one of those books that really made an impression on me.  I absolutely loved it but more about that in a bit.

Anna is the lead character and at the beginning of the book, she is struggling to cope with the death of her husband Matthew.  However skeletons come tumbling out of the closet and Anna begins to realise that the Matthew she was married to, has a whole different side to him.  He has been have an affair on the side.  Unsurprisingly Anna is thrown by this development and she wonders if his mistress appears at his funeral.  She seems to analyse every other woman attending the funeral.  She tries to add 2 + 2 but she often ends up with 6.  She tries to build a new life for herself but it isn’t easy for her.  Anna is one tough cookie but she has her vulnerable side to her as well and I couldn’t help but want to jump inside the pages of the book to give her a cuddle.  Anna loved her husband but she tries to shield her children from the truth.  Anna is certainly a feisty woman, she is kind, compassionate, easy going, determined and occasionally stubborn.  She’s certainly the sort of woman, I could picture myself having a good old gossip with over a cup of tea or ten.  I took to her from the start and it didn’t take me long to consider her to be a friend of mine.

Oh my word, ‘Anna’ was certainly one heck of an emotional read.  I did think that it was going to be one of those serious reads that is rather negative in nature (you know the sort I mean) but that couldn’t be further from the truth.  Okay so there are some sad scenes in the book but there are also lighter hearted amusing moments too that had me laughing and chuckling away to myself.  One such moment was the way Anna’s mother took her own picnic to the church for the funeral and she was rather tiddly drunk.  I could just imagine it happening.  I found myself nodding along in agreement to some of the other things that happened.  I mean at every funeral, there’s somebody who tries to take the role of chief mourner and makes snide comments like ‘I wondered when it would be my turn’ after the bereaved have made their way around everybody at the funeral.  That certainly happened to me after the death of Papa Ginger Book Geek.

I soon became addicted to reading this book and by the end of the first page, I knew that it would turn out to be a page turner.  So it proved to be.  I couldn’t get enough of the story.  I took to Anna so much that I couldn’t wait to get through the book to discover what the future had in store for her.  The more I read, the further into the story I got and my desperation to find out what happened increased.  I was so mesmerised by the story that I lost all track of time.  The first time I looked up to see how long I had been reading for, I was stunned to realise that a couple of hours had gone past.

‘Anna’ is really well written but then I wouldn’t expect anything else from Patricia Dixon.  She has a writing style that is easy to get used to and easy to get along with.  She describes her characters so well that they jumped off the page as it were and sprang to life.  She writes in such a realistic way that I felt as though I was part of the story myself.  This is an emotive but essentially uplifting read about families, love and friendship.

In short, I loved reading ‘Anna’ and it’s safe to say that Patricia Dixon has another bestselling hit on her hands with ‘Anna’, which is nothing less than she deserves.  I definitely recommend that you read her books.  The score on the Ginger Book Geek board is a very well deserved 5* out of 5*.