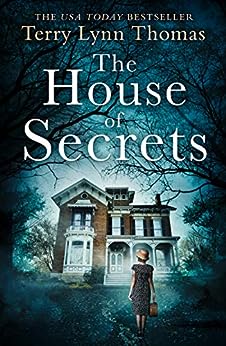 Sarah Bennett has two secrets: she sees ghosts, and she is in love with a spy.

When Sarah takes a job with occult expert Dr Matthew Geisler, he promises to help her understand the sorrowful spirit that seems to have attached itself to her.

As Sarah struggles to cope with the ghostly presence, she runs into Zeke, the man who left her six months earlier and is recovering from injuries suffered in an alleged accident. But Zeke has secrets of his own, and when an attempt is made on Geisler’s life, Sarah finds herself caught in a struggle between the living and the dead.

Unsure who she can trust, Sarah must solve the mystery of the soul determined to haunt her, and save Dr Geisler and herself from an unknown threat.

What can I say about Sarah Bennett?  It didn’t take me long at all to warm to her and by the end of the book I felt as though she had become a close friend.  She has been dealt a pretty bad deal.  She was involved in a court case involving a close relative and after the trial she was shunned by all and sundry.  Nobody would allow her room in their houses and nobody would give her a job.  That is until Dr. Geisler offers her board and lodgings and a job too.  Geisler finds Sarah Bennett and her talent/ skill fascinating.  He believes in her and knows that she is telling the truth about certain things.  Sorry I don’t want to go too far into the specifics because I would hate to give too much away.   Sarah is bright, funny, stubborn, tenacious, compassionate, kind and I found her to be trustworthy.

Oh my goodness me, I loved ‘The House Of Secrets’.  I have a bit of a fascination in mental health facilities, which stems from the fact that I would have loved to have been a  mental health nurse but that sadly isn’t possible.  I find mental health fascinating in general too.  I also believe that people can be psychics or mediums and they do see the future or past events.  This Ginger Book Geek is also a bit psychic but I won’t bore with the details other than to say that I have predicted events before they have happened and they have then happened just as I described them.  Mystic Meg has nothing on me………..  In all seriousness I hope that you can see why the synopsis of this book appealed to me.

I was hooked on this book from the moment I began to read.  I loved the fact that the book is set during the Second World War, as that period of time is another fascination of mine.  For me, this was an easy book to read in the sense that I was so fixated on the story and I had warmed to the lead character so much that I just kept turning the pages automatically.  Whilst I was reading this book I noticed neither how quickly the time was passing and how quickly the pages were turning.  I got to the end of the story far quicker than I had intended to.  I desperately tried to ration how much I read in one go because I wanted to prolong my enjoyment of the book but that attempt at rationing went out of the window because I just couldn’t put the book down.  My Kindle might as well have been glued to my hand because it came everywhere with me.  It was as if I had a fear of missing out on something such as a vital clue or some gossip.

‘The House Of Secrets’ is very well written.  I loved the way in which Terry has created such realistic characters that they seem to jump off the page and spring to life as it were. Terry has a writing style that is easy to get used to and easy to get along with.  She draws you in from the first word on the first page and once she has your attention, she doesn’t let you go.  I was a ‘happy captive’ in that I didn’t want to be released.

In short, I loved reading ‘The House Of Secrets’ and I would definitely recommend it to other readers.  I can’t wait to read what Terry comes up with next, but whilst I wait I will most definitely be finding her other books and reading them as soon as I can.  The score on the Ginger Book Geek board is a very well deserved 5* out of 5*.