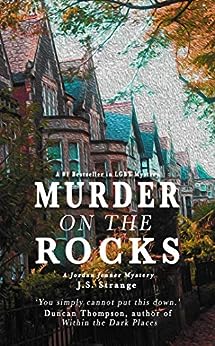 When PI Jordan Jenner returns to work following the death of his mother, his first case involves a murdered writer…

James Fairview has been killed. As a member of a prestigious writing group hosted by bestselling author Joseph Gordon in the heart of Cardiff, Jordan not only has to cope with solving the mystery, but also deal with press attention.

As Jordan investigates, he discovers his mother’s death may not have been so simple. And when another writer is murdered, Jordan realises the killer could strike again…

A murdered writer, a mysterious death, and a group with jealousy at its heart, this is Jenner’s toughest case yet.

I am certainly not going to forget Private Investigator Jordan Jenner in a hurry.  I must admit that it took me a short while to warm to Jenner as he irritated me a bit but it didn’t take me long to realise that beneath the surface Jenner was a much deeper and more complex character than he at first appeared to be.  Jenner loses his mother and it’s certain that he feels her loss immensely.  At the time of the story he is still in the fairly early stages of grief.  Jenner has a way of getting information out of people without them even realising what he is up to.  The first case following his mother’s death sees him investigate the death of a member of a writing group.  The group is being run by a famous author.  So this case certainly lands Jenner in the deep end and not only has he got to find a way to work through his grief but he has to do so in the glare of the media, who have assembled on account of the fame of the course leader.  Will Jenner successfully investigate the case?  Well for the answers to that question and so much more you are just going to have to read the book to find out as I am not going to tell you.

‘Murder On The Rocks’ came along just at the right time for me.  I was in need of a book that would take my mind off certain things and keep my interest all the way through.  ‘Murder On The Rocks’ ticked those boxes and then some.  I enjoyed reading this book from the moment I picked up the book and first began to read.  I soon immersed myself in the story and after I took to Jenner, I became addicted to reading this book.  I binge read the book over the course of a couple of days.  The page numbers seemed to fly past in a blur and before I knew what was happening, I had finished the book.

In my opinion ‘Murder On The Rocks’ is definitely well written with a lead detective, who will stay fresh in my mind for a long while to come.  It’s not often that you come across a male lead detective, who happens to be gay and not a seven times divorcee, who is also borderline alcoholic, which seems to be the more common background of a detective.  Okay well maybe I exaggerate but you get the gist of what I mean.  The author has a writing style that was easy to take to and easy to get along with.  He draws you in from the first word on the first page and he makes you feel as though you are part of the story yourself.  Another thing that I find interesting is the fact that the story is set in Cardiff.  The majority of crime stories usually stick to one of the main English and Scottish cities.  In fact I can’t think of another crime series that is set of Cardiff.

In short, I really, really enjoyed reading ‘Murder On The Rocks’ and I will most definitely be reading some of the author’s future books.  I can’t wait to read what he comes up with next.  The score on the Ginger Book Geek board is a very well deserved 5* out of 5*.