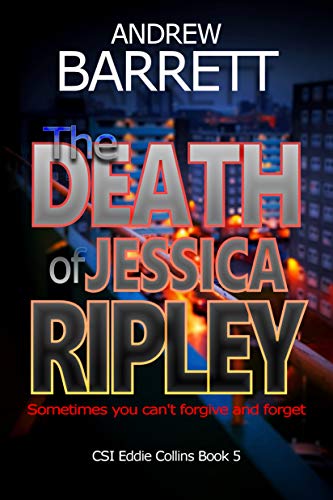 Sometimes you can’t forgive and forget.

Jessica Ripley didn’t kill her ex-husband. But everyone thinks she did. After serving twelve years for his murder, it’s time to get her own back on those who put her inside.

During those twelve years, Jessy’s son, Michael, has turned against her. Whatever mercy Jessy had for her intended victims, has gone.

CSI Eddie Collins is having a hard time watching his father enjoying life. He’s also having it tough in the form of two new recruits to his office. One is off his tree on drugs and the other wants his job.

And then the murders begin.

Can Eddie trust the evidence, or is someone out to get even?

And who did kill Jessy’s ex?

I have a little confession to make- yes yet another one (this is becoming a habit).  Although I have all of the Eddie Collins series on my Kindle, much to my embarrassment I have only read two of them.  Whoops.  I was invited to take part in the blog tour for Andrew’s latest book to involve Eddie Collins, which is called ‘The Death Of Jessica Ripley’.  Having been reminded how bloody brilliant the series is, I can guarantee that the other books in the series will not be unread for very much longer.  I absolutely loved ‘The Death Of Jessica Ripley’ but more about that in a bit.

What can I say about Crime Scene Investigator Eddie Collins?  For a start he is a real grumpy git.  He is now the supervisor of the CSI team and he is not enjoying his new role.  He lets everybody know how he feels on several occasions.  He gets on well with some members of the team but he could quite cheerfully throttle one of the newer members of the team.   This member of the team is very in your face, he cracks funnies that aren’t funny and he tries to be a cocky devil, which is never a good idea when you have a boss like Collins.  I have to say that part of me did cheer when Collins physically grappled with him in Collins’ office.  Collins is a bit of a loner too.  I got the impression that Collins finds his job interesting but in a sense he resents it too.  He seems to resent the fact that following his promotion, he has to deal with more paperwork bureaucracy and he doesn’t get to spend as much time out in the field.  He does find fieldwork interesting and it’s certainly true to say that no two days are ever the same.  I also love the gallows style of humour that Collins seems to have.  If a member of the public heard some of the things that he said, they would be appalled but those working within the same profession would find funny.

Oh. My. Goodness. Me. I had stupidly forgotten how bloody brilliant Andrew’s writing is.  As soon as I started reading ‘The Death Of Jessica Ripley’ I realised that I wouldn’t be able to put the book down and all plans for the rest of the day would have to be cancelled.  I just couldn’t bear to tear myself away from this thrilling story.  I initially picked the book up only intending to read a couple of chapters but half a dozen chapters later and I was still sitting there reading.  I tried to ration how much of this book I read in one go because I wanted to prolong my enjoyment of the book but my attempts soon flew out of the window because I couldn’t stop reading due to my increasing desperation to discover how the story panned out.  It will come as no surprise that I read the book in one sitting.  I was so focused on the book that the world could have ended and I wouldn’t have realised.

‘The Death Of Jessica Ripley’ is brilliantly written but then I wouldn’t expect anything else from Andrew Barrett.  He certainly knows how to grab your attention from the start and he dangles enough bait in front of you to keep your attention all the way through the book.  The story takes on an added sense of authenticity when you consider that Andrew Barrett is himself a trained Crime Scene Investigator with many years experience behind him.  For me the story hit the ground running and maintained the pace throughout. Andrew has a writing style that uses such powerful and vivid descriptions that I really did feel as though I was a member of Collins’ team.  I even began to interact with the book in the sense that I was saying the odd observation out loud or chuckling away at something that I had read and well you get the picture.

Reading ‘The Death Of Jessica Ripley’ was much like being on a very scary and rather unpredictable rollercoaster ride with more twists and turns than you would find on a Snakes & Ladders board.  On a couple of occasions, I smugly thought that I had fathomed out who was doing what and why, only to realise that I had completely got the wrong end of the stick and the guilty party was somebody else entirely.  There were also times when I almost had to read through my fingers as I feared what was going to happen next or what awaited me over the page.  I gave my head a shake and realised that of course I would have to read on if I had any hope of discovering how the story panned out.

In a nutshell, I bloody loved reading ‘The Death Of Jessica Ripley, which has to be one of my favourite books of the year so far.  I can’t wait to read what Andrew Barrett comes up with next.  Here’s hoping that I don’t have too long to wait but whilst I wait I will definitely be reading the rest of the series.  I am sure that I will love the rest of the series just as much as I love this book.  The score on the Ginger Book Geek board is a very, very well deserved 5* out of 5*.