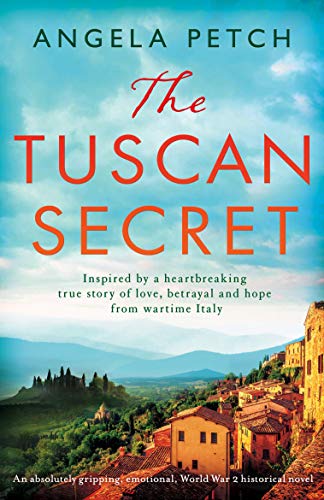 Il Mulino. An old crumbling mill, by a winding river, nestled in the Tuscan mountains. An empty home that holds memories of homemade pasta and Nonna’s stories by the fire, and later: the Nazi invasion, and a family torn apart by a heartbreaking betrayal.

Anna is distraught when her beloved mother, Ines, passes away. She inherits a box of papers, handwritten in Italian and yellowed with age, and a tantalising promise that the truth about what happened during the war lies within.

The diaries lead Anna to the small village of Rofelle, where she slowly starts to heal as she explores sun-kissed olive groves, and pieces together her mother’s past: happy days spent herding sheep across Tuscan meadows cruelly interrupted when World War Two erupted and the Nazis arrived; fleeing her home to join the Resistenza; and risking everything to protect an injured British soldier who captured her heart. But Anna is no closer to learning the truth: what sent Ines running from her adored homeland?

When she meets an elderly Italian gentleman living in a deserted hamlet, who flinches at her mother’s name and refuses to speak English, Anna is sure he knows more about the devastating secret that tore apart her mother’s family. But in this small Tuscan community, some wartime secrets were never meant to be uncovered…

I love discovering new authors and I love reading historical fiction.  It’s easy to see why ‘The Tuscan Secret’ appealed to me so much.  I couldn’t wait to start reading and so without further ado I jumped straight in.  Boy what an emotional read ‘The Tuscan Secret’ proved to be.

I really felt for the character of Anna.  When the story starts, we learn that she has lost her mother.  Anna does have a brother and sister but there’s a bit of an age gap between them and Anna and they don’t really have a lot to do with each other.  Anna has to come to terms with her grief and find a way forward.  When her mother’s possessions are shared out in the will, among other things Anna inherits a box of documents, letters and papers but they are all in Italian.  It was at this point that I wanted to jump inside the pages of the book to give Anna a hug and a shoulder to cry on.  Whilst going through the box of her mother’s treasured papers, Anna becomes intrigued as to what the truth is about what happened during the war.  Anna decides to go and follow in her beloved mother’s and grandmother’s footsteps and hopefully find the answer as to what really did happen during the war.

Blooming nora, ‘The Tuscan Secret’ is one hell of an emotional read.  There were several times during the story that I felt myself welling up and on the verge of tears.  I think that I felt as though I had become part of the story myself and I was imagining how I would feel in Anna’s shoes.  It was almost as if I was ‘living’ the story as if it were real.

It didn’t take me long at all to get into this story.  Right from the beginning, I knew that this was one book that I would be unable to put down and so it proved to be.  Rather than read it in one go, I found that I had to binge read it.  I had to take a break every now and then to regather my thoughts and recover from what I had read.

‘The Tuscan Secret’ is written superbly.  There are two timelines in play that run parallel to each other.  One describes events as they happened during the war and the other timelines is more modern in nature and follows Anna’s attempts to get the answers that she needs and to unravel the mystery.  I did think that perhaps this way of telling the story wouldn’t work and I would end up feeling more confused than ever.  I needed have worried though because the two timelines interlinked really well and the story flows seamlessly.  Angela grabs your attention from the start and she doesn’t let it or you go.  That’s how it felt to me and I was a happy captive in that sense.  Angela has one of those writing styles that it easy to get along with and easy to get used to.  She has a way of writing that makes you feel as though you are part of the story yourself.  That’s how I felt anyway.  Angela clearly cares about her characters and this shines through in her writing.  Angela writes with great passion, compassion and sensitivity.

In short, I really did enjoy reading ‘The Tuscan Secret’ and I would recommend it to other readers.  I can’t wait to read what Angela comes up with next.  The score on the Ginger Book Geek board is a very well deserved 4* out of 5*.