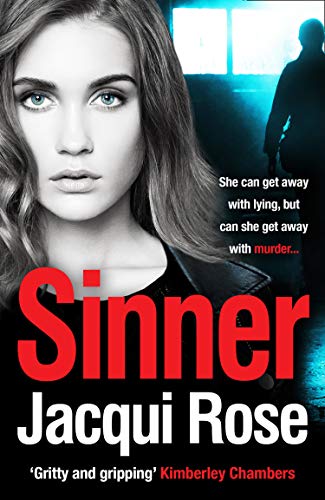 My blog post for my stop on the blog tour for ‘Sinner’ is different to the majority of my blog tour posts in that it comes in two parts.  The first part (this part) contains my review and the second part contains an extract from the book to give you a taste of what to expect when you pick the book up for yourselves.  I hope you enjoy reading it just as much as I did.

Having been brought up amongst the hardest gangsters and faces of London, Franny Doyle learnt never to let love be her weakness. But she’ll do anything to protect those close to her, and at whatever cost.

Her partner Alfie Jennings is under pressure. The only person he ever sent down has recently been released from prison, and his Soho nightclub is under threat from his rival Charlie Eton – a man who doesn’t respond kindly to people taking away his business.

Charlie is playing dirty to come out on top, and when innocent children become involved in the feud, Franny and Alfie are dragged into a dark underworld where Alfie must face demons from his past, and Franny is in a dangerous race against time to ensure her own secrets aren’t exposed.

I have been a fan of Jacqui’s for a fair while now.  I love the gritty, gripping, fast paced stories that she writes.  I have read each of her books and I eagerly wait for each new book that she releases.  Jacqui’s most recent book is called ‘Sinner’ and was released on 13th June 2019.  I flipping loved it but more about that in a bit.

I love the mixed bunch of characters that appear in ‘Sinner’.  Franny is one tough cookie but then she has had to be.  She was brought up around some of the hardest gangsters in London.  She tries to be tough but she has a weakness in the form of those she is closest to.  She will do everything in her power to keep them safe.  Franny’s partner Alfie is under pressure and feeling very paranoid.  He has a business rival called Charlie, who has not taken kindly to Alfie’s efforts to take business away from him.  A feud ensues and as you can imagine dirty tricks are played, innocent children are dragged into it and certain characters have to confront their demons and try to ensure that their secrets are not spilled.  Oh my goodness all three of the main characters scared the doo doo out of me.  They are all tough nuts but even tough nuts crack occasionally.  I have to say that I wouldn’t want to get on the wrong side of them.  I can’t say that I actually loved any of the characters but I did warm to Franny and I hoped that she would end the book in one piece and that she would be safe.

Oh my flipping (not the word I wanted to use but Mrs. Ginger Book Geek might be watching and she doesn’t like the word I wanted to put) goodness me ‘Sinner’ is certainly one hell of a read. The story starts with a bang and then maintains the fast pace throughout.   It does what it says on the tin and perfectly fits the tagline of the book.  It really is ‘a gripping crime thriller that will keep you in suspense’.  I was gripped by the story and I was practically on the edge of my seat throughout.  I just couldn’t put the book down.  It wasn’t exactly glued to my hand but it might as well have been because it came everywhere with me.  I think that I thought I would miss something if I put the book down for even just a second.  The pages turned increasingly quickly as my desperation to find out how the story panned out increased.  All too soon I got to the end of the book.  I don’t mean that negatively but I was enjoying the author’s writing style, the storylines and the characters so much that I just wanted the book to continue on and on.

‘Sinner’ is brilliantly written.  Jacqui has a writing style that draws you in from the start and she dangles enough bait in front of your nose to keep you interested all the way through.  Jacqui does describe some difficult subjects in ‘Sinner’ but I didn’t let them put me off reading the book.  I love the way in which Jacqui uses such powerful, vivid and realistic descriptions in her book.  I really did feel as though I was part of the story myself.  I have to say that her descriptions of the criminal underworld scared the poop out of me.

‘Sinner’ is actually the third book in the series featuring Alfie and Franny.  It reads perfectly well as a standalone but because I am a bit OCD, I would recommend reading the series from the beginning and in order.

In a nutshell, I loved reading ‘Sinner’ even if parts of the book were difficult to read on account of the often disturbing subject matter.  Jacqui Rose has done it again and written a gripping, gritty and realistic crime thriller that is sure to shoot to the top of the bestsellers list and that is nothing less than she deserves.  I would definitely recommend her books to other readers but particularly to those readers who enjoy books by Martina Cole, Kimberley Chambers, Jessie Keane, Heather Burnside, Kerry Barnes, Mandasue Heller etc.  I can’t wait to read what Jacqui comes up with next.  Here’s hoping that we don’t have too long to wait.  The score on the Ginger Book Geek board is a very well deserved 5* out of 5*.