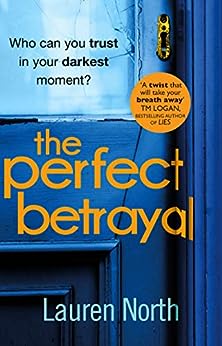 After the sudden death of her husband, Tess is drowning in grief. All she has left is her son, Jamie, and she’ll do anything to protect him – but she’s struggling to cope.

When grief counsellor Shelley knocks on their door, everything changes. Shelley is understanding and kind, and promises she can help Tess through the hardest time of her life.

But when a string of unsettling events happens and questions arise over her husband’s death, Tess starts to suspect that Shelley may have an ulterior motive. Tess knows she must do everything she can to keep Jamie safe – but she’s at her most vulnerable, and that’s a dangerous place to be . .

I read the synopsis for ‘The Perfect Betrayal’ and it sounded like just my kind of read.  A psychological thriller with a twist or two.  I soon began to read and it didn’t take me long to realise that the book was so much more than I had expected.  I mean that in the nicest possible way.  I absolutely loved ‘The Perfect Betrayal’ but more about that in a bit.

I wasn’t sure what to make of Tess at first and I can’t say that I warmed to her.  She is a woman, who has lost her husband in an aeroplane crash caused by a suicidal pilot.  The husband has been keeping secrets from Tess, which come to light following a letter she receives about compensation.  Tess is caring for her son and both are working through their grief.  Even in such distressing times, Tess doesn’t have an easy time of it because her brother in law is wanting his money back after Tess’ husband borrowed it before his death.  Tess claims that she doesn’t know about the money but I wasn’t sure whether or not to believe her.  Tess is vulnerable at the moment and it’s sad to say that the vultures start circling and exploit her vulnerability.  There was one character who I wouldn’t trust as far as I could throw her. and I wasn’t sure of her motives to start with.  I think that I have read too many crime or psychological thrillers and suspect everybody and believe nobody.

I haven’t read a psychological thriller as good as this one in a very, very long time.  I was hooked on the story from the moment I opened the book and that was it.  Everything I had planned for the day went out of the window because I couldn’t bear to be parted from the book.  I just had to know if my suspicions were correct and what the real story was. The book came everywhere with me.  It was as if I feared that I would miss out on some vital clue or other if I put the book down.  I just became so wrapped up in the story that I managed to shut out all other distractions.  Usually I am easily distracted and I have the attention span of a gnat but not in the case of ‘this book.  Whilst I was reading this book I lost all track of time and of what was going on around me.

‘The Perfect Betrayal’ is superbly written.  The author has a writing style that will draw you into the story and she dangles enough bait in front of your nose to keep your interest all the way through the story.  That’s what happened to me at any rate.  The plot is tight and to say that there are a fair few twists and turns seems something of an understatement.  I love the way in which she can turn the story on its head at the drop of a hat.  The author uses such powerful and realistic descriptions that I really did feel as though I was part of the story myself.  I really think that the author has written a very realistic portrayal of how somebody can almost be destroyed by grief at the sudden death of a loved one.

In short, I absolutely loved reading ‘The Perfect Betrayal’ and I would definitely recommend it to other readers.  I can’t wait to read what Lauren comes up with next.  Here’s hoping that we don’t have too long to wait.  The score on the Ginger Book Geek board is a very well deserved 5* out of 5*.