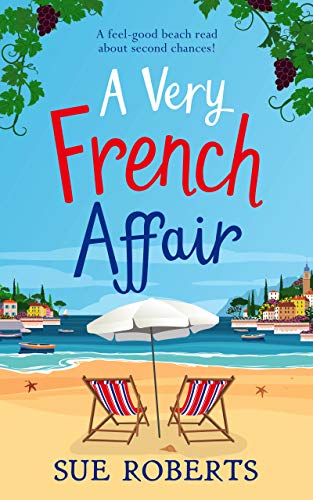 From Southport to the South of France – this is going to be a summer to remember!

Life just got a whole lot more complicated for thirty-eight-year-old single mum Liv. Her son Jake is practically perfect in every way, but he’s started asking some difficult questions, and the answers lie in a holiday romance twenty years ago. Back when Liv was staying with her aunt on the French Riviera…

Returning to the Cote d’Azur, with its white sandy beaches, her supportive aunt, and exquisite wine and cheese is harder than it sounds though. Because – if she’s going to give Jake the answers he needs – Liv knows she has to hunt down her first love Andre. And since she’s a professional baker rather than a professional investigator, she doesn’t even have a clue where to start.

At first, finding the one that got away proves even trickier than she thought. And if she succeeds, how will he take the bombshell secret Liv has been keeping? Liv has to do the best thing for her family, but does that mean closing the door on this very French affair?

I have been a fan of Sue’s for a while now.  Each time she releases a book, I am usually first in the queue to get a copy.  I read the synopsis for ‘A Very French Affair’ and it sounded like a great read.  Oh my word, ‘A Very French Affair’ is a simply brilliant read.  I loved it but more about that in a bit.

I couldn’t help but take to Liv from the first moment I met her.  She is a lovely sounding woman, who is a devoted single mother to her son Jake, who is now an adult himself.  Jake is starting to ask some tough questions about his biological father and Liv realises that she has to do everything she can to find her son’s biological father to get Jake some answers.  The only problem is Liv doesn’t know where her son’s father is exactly.  I get the impression that Liv feels torn.  On the one hand she doesn’t want to upset the apple cart by contacting her son’s father, who doesn’t exactly know he is a father.  On the other hand she sees that her son is unhappy and she wants to make things right between them.  The decision on what to do is soon made for her because she is asked to go and cover her aunt’s patisserie.  Liv realises that she can kill two birds with one stone by covering her aunt’s shop and by looking for her son’s French father whenever she has free time.  Liv sounds lovely, charming, confident, bubbly friendly, kind, compassionate and sensitive.  Liv sounds like she is that bothered in making sure that everybody else is ok and her own self care is way down her priority list.  I kept everything crossed that things would improve for Liv, she would find her son’s father and that she got the happy ever after that she so deserved.

‘A Very French Affair’ is another delightful read that almost saw me packing my own suitcase and embarking on my very own French adventure.  Each time she releases a book, I often feel as though I am on my travels when the lead characters go jetting off to sunnier climates.  I soon became addicted to reading ‘A Very French Affair’.  I couldn’t get enough of the book.  I had taken to the characters so much and believed in their storylines so much, that I just couldn’t stop reading.  I had to know how things panned out.  The pages turned over increasingly quickly and it seemed like I reached the end of the book far quicker than I had intended.  I picked up the book only intending to read a couple of chapters but well over a dozen chapters later, I was still sat there reading.

Reading ‘A Very French Affair’ really was a breath of fresh air.  Sue has written another charming tale about characters that you will love and places that you will fall in love with.  This book has a bit of everything – sorrow, happiness, sadness, drama and a very generous helping of humour and I loved every single bit.  I would definitely recommend this author and her books to other readers.  I can’t wait to read what Sue comes up with next.  Here’s hoping that we don’t have too long to wait.  The score on the Ginger Book Geek board is a very well deserved 5* out of 5*.