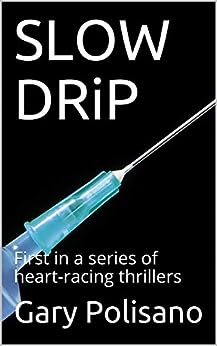 When a beautiful and highly-intuitive small town police detective is presented with a third related murder, she tries to follow conventional police procedure, while the teenage boy who discovered the body possesses clues of his own that may lead directly to the killer, a mysterious figure with seemingly advanced medical knowledge who like to torture his victims in a particular sick manner. Clues and taunts left by the killer along with the knowledge held by the teenager cause the three characters to intersect in a dangerous game of cat and mouse.

I read the synopsis for ‘Slow Drip’ and it sounded like just my kind of read.  A murder mystery with a killer trying to outwit the police.  I couldn’t wait to start reading this book and having just finished it, I can say with certainty that it is one heck of a read.  I absolutely loved it but more about that in a bit.

The murderer in this book really is chilling and he gave me the heebee jeebies.  He seems numb and whilst he is killing people, he doesn’t feel remorse or anything for them but he is excited by the way in which he kills them.  He certainly takes pleasure in his work.  He also seems to have expert medical know how.  As much as I loathe the murderer, I do sort of admire the precision with which he carries out certain medical procedures.  He seems to vary the way in which he kills people to give him the maximum pleasure and to prolong the agony that his victims suffer in their dying moments.  The murderer is not somebody that I would ever want to meet down a dark alley on a cold night.

Oh my days, ‘Slow Drip’ is one hell of a read and then some.  I soon became addicted to reading this book and at times I couldn’t put it down.  I had to keep reading to see who was next on the killer’s hit list and to see whether or not the police would catch the killer before any further lives were lost.  Rather than read the book over the course of one day, I binge read the book over the course of a few days, as I needed time to think about what I had read.  Whilst I was reading this book I didn’t realise just how quickly the time was passing or the speed with which the pages were turning and then all of a sudden I got to the end of the book, which I was so disappointed about.  In fact the world outside could have ended and I wouldn’t have noticed because I was so focused on the story and the different characters.

‘Slow Drip’ is really well written.  The story starts off with an incident so shocking that it will stay in my mind for a long time to come.  The author grabs your attention from the start and he ensures you keep on reading by dangling enough bait in front of your nose.  I really did feel as though the book had developed a hold over me.  The author describes the characters so well that they seem to jump off the page and spring to life as it were.  The killer creeped me out that much that I felt in need of a good scrub to erase all trace of him.  The author uses such powerful descriptions that I really did feel as though I was part of the story myself and I was involved in the police investigation.  I did feel as though I learnt something whilst reading this book because I gained anatomical knowledge that I previously hadn’t known.

Reading this book was like being on one hell of a scary and unpredictable rollercoaster ride with a fair few twists and turns along the way.  There were times I almost had to stop reading because of the gruesome nature of the crimes or I dreaded turning the page as I feared what was waiting for me over the page.  I gave my head a shake and told myself that if I had any hope of finding out how the story panned out and concluded of course I had to read on.

In a nutshell, ‘Slow Drip’ is one hell of a fantastic but scary read.  I would recommend this book to other readers and particularly to readers who like the more gruesome sort of story.  I will definitely be reading more of Gary’s work in the future.  I can’t wait to read what he comes up with next.  The scarier the better (I must be a sadist).  The score on the Ginger Book Geek board is a very well deserved 5* out of 5*.