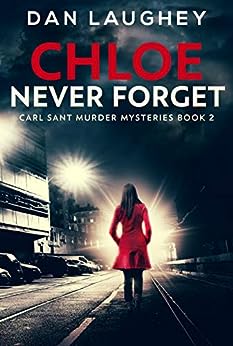 An off-duty detective gunned down. A dead woman. A missing student. And now, a former policeman in search of his past. Dead or alive, something connects these people, and it’s up to D.I. Carl Sant to discover what it is.

A series of cold-case inquiries leads D.I. Sant and his colleagues to investigate a botched assassination plot dating back to the 1980s. The deeper they dig, the more secrets are revealed, including shocking connections to the infamous National Front.

Meanwhile, the memory of former P.C. Tanner, survivor of the assassination, is recovering. Sant must find Tanner and figure out who is behind it all, before his superiors lose their rag and more lives are lost.

This is the second instalment of the story featuring Detective Inspector Carl Sant and his investigation into the disappearance of Chloe and the murder of a police officer.  I read, reviewed and loved the first book in the series called ‘Chloe- Lost Girl’ and I couldn’t wait to get my hands on a copy of ‘Chloe – Never Forget’.  Wowzers, I thought that the first book was good but this second book is even better.  I absolutely loved reading ‘Chloe – Never Forget’ but more about that in a bit.

What can I say about Detective Inspector Carl Sant?  Well for a start off, he is a determined and experienced police officer.  If he gets a case then you can rest assured that he will put all his efforts into working toward a successful conclusion of the case.  He throws himself into investigations 110%.  Sant leads from the front and he wouldn’t ask you to do anything that he wouldn’t be willing to do himself.  He has occasionally been reprimanded by his superiors but he doesn’t let that affect his work.  He investigates a case fully although he keeps certain things from his superiors and he doesn’t let his superiors’ interference to put him off a line of enquiry.  Sant is hardworking, determined, stubborn and feisty.  I took to Sant from the start and it didn’t take me long until I began to think of him as a friend.

Oh my giddy aunt ‘Chloe – Never Forget’ really is a fantastic book, which had me gripped and on the edge of my seat throughout.  I soon became addicted to reading this book and for me the book was simply unputdownable.  The book seemed to develop a hold over me and I thought that if I put the book to one side, I would potentially break that hold.  I also feared that I would miss out on some gossip or a vital clue if I broke off from reading.  I binge read the book over the course of a day but I was so tuned into the book and so focused on the story that I neither noticed how quickly the time was passing nor how quickly the pages were turning.  All too soon I got to the end of the book, which I was so disappointed about.  I wasn’t disappointed with the ending but I was enjoying the author’s writing style, the characters and the storylines so much that I wanted the book to continue on and on.

‘Chloe – Never Forget’ is brilliantly written but then I wouldn’t expect anything else from Dan Laughey.  The story hits the ground running and for me, it maintained the breakneck speed throughout the story.  Dan certainly knows how to grab your attention and he dangles enough bait in front of your nose to ensure that he keeps your attention all the way through the book and you feel compelled (in the nicest possible way) to keep reading.  He writes in such a vivid and descriptive way that it made me feel as though I was part of the story myself.

Reading this book felt like being on one hell of a fast, scary and unpredictable rollercoaster ride with a fair few twists and turns along the way.  Just when you think you know how the story is going to pan out, Dan turns the story on its head and you end up going down another route altogether.