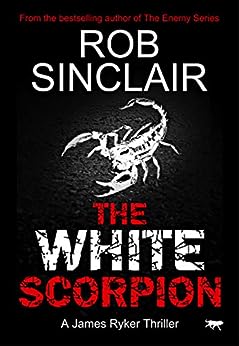 Rule number one for an agent of the secretive JIA is to follow orders, no matter what.

But James Ryker has never cared much for rules. He only wants to do what is right.

Assigned to join a crew of elite security personnel in Chabon, Africa, Ryker’s mission objective is clouded by politics and obfuscation, and he knows only that to protect British interests in the region, he is to infiltrate the close protection team of the government of Chabon, a country with a dark and violent past.

Arriving in Chabon’s crumbling capital, Kilpassa, Ryker finds a country on the brink of civil war. A growing civilian rebellion threatens peace, with claims of atrocities committed by both sides, including the frail government run by enigmatic President Benyu – a former military general who took control of the country in a violent coup.

Drawn into Benyu’s inner circle, it soon becomes clear to Ryker that in Chabon, the lines between good and bad, and right and wrong, are nearly impossible to identify.

With a crisis of epic proportions unfolding before his eyes, Ryker knows one thing for sure: with or without the backing of his superiors, he must take drastic action, and quickly, or risk putting millions of innocent lives in danger.

What can I say about James Ryker?  I imagine him to look rather rugged and he is the sort of dashing hero that most women and a fair few men would want to be rescued by.  Ryker is the best spook that there is and he is your well rounded one man killing machine.   He is an ace marksman, assassin and bodyguard all rolled into one.  He scares the crap out of me and I certainly wouldn’t want to come up against him.  He is a man with a conscience though because if he is given an assignment, he needs to know that the assignment is justified and not of dubious origin.  Ryker will not hesitate to take action against those who deserve to be dealt with.  Ryker is a hard nut but underneath that tough exterior lies a heart of gold.  He is loyal to those he cares about and who deserve his loyalty.

Oh my blooming goodness gracious me, ‘The White Scorpion’ is another amazing read from the hugely talented Rob Sinclair.  I was gripped throughout the story and I was on the edge of my seat throughout.  For me, ‘The White Scorpion’ was unputdownable.  No the book wasn’t exactly glued to my hand but it might as well have been because it travelled everywhere with me.  The book had developed a hold over me and it was as if I feared breaking that hold if I put the book down for even just a nanosecond.  I read this book over the course of a day but I was enjoying the story so much that I failed to notice how quickly the time was passing and how quickly the pages were turning.  All too soon I got to the end of the book, which I was most disappointed about.  I don’t mean that I was disappointed with how the story ended but I was enjoying the author’s writing style, the storylines and the characters so much that I just didn’t want the book to end.

‘The White Scorpion’ is superbly written.  The author draws you in from the first word on the first page and he dangles enough bait in front of you to encourage you to keep reading.  Not that I needed any encouragement.  The story hits the ground running and maintains the pace throughout.  The author write so convincingly and realistically that I felt as though I as part of the story myself.  Although I have to say that if I had been part of this story I would have been hiding somewhere because I am a huge wimp and not really a fighter.

Reading ‘The White Scorpion’ was like being on one of the world’s scariest and most unpredictable rollercoaster rides with more twists and turns than you know what to do with.  There were several times where I either had to almost read through my fingers or I had to hide behind my cushion because I feared what was going to happen next and I feared what was waiting for me over the page.  Then I had to give my head a shake because I realised that if I wanted to discover how the story ended then of course I had to keep reading.

In short, I thoroughly enjoyed reading ‘The White Scorpion’ and I would definitely recommend this author and this series to other readers.  If you want a series that will get your adrenaline pumping, your heart rate racing and your blood pressure soaring then the James Ryker series is for you.  I can’t wait to read what Rob comes up with next.  Here’s hoping that we don’t have too long to wait.  The score on the Ginger Book Geek board is a very well deserved 5* out of 5*.