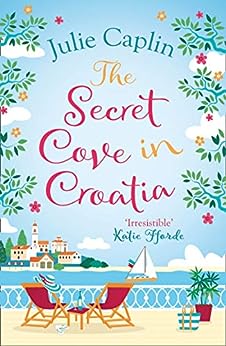 When no-nonsense, down-to-earth Maddie Wilcox is offered the chance to work on a luxury yacht for the summer, she can’t say no. Yes she’ll be waiting on the posh guests… But island-hopping around the Adriatic sea will more than make up for it – especially when Nick, her best friend Nina’s brother, is one of them.

Sparks fly when they meet on board and Maddie can’t believe self-entitled jerk Nick is really related to Nina. But in a secret, picture-perfect cove, away from the real world, Maddie and Nick discover they might have more in common than they realise…

Okay I have a confession to make.  Yes yet another one.  Although I have Julie’s other books on my huge and ever increasing ‘to be read’ mountain, I haven’t actually read one……………………until now that is.  Now I know just how great an author Julie is, I am actually mad at myself for leaving it this long to read one of her books.  I thoroughly enjoyed reading ‘The Secret Cove In Croatia’ but more about that in a bit.

I couldn’t help but take to Maddie and Nick from the first time I met them both.  We meet Nick first when he assists in a fashion shoot on his family’s land.  One of the models takes a shine to him and a relationship soon follows.  They couldn’t be worse for each other.  I know that opposites attract but not in this case.  Their differences couldn’t be more glaringly obvious.  Nick is invited to spend a holiday with the model and some friends aboard a chartered yacht.  It’s during this holiday that Nick meets Maddie for the first time.  I was a bit surprised that they hadn’t met before considering that Maddie is a very good friend of Nick’s sister.  Maddie has been hired to be the cook and the chambermaid for the yacht.  Getting this job couldn’t have come along at a better time for Maddie, as she needs to earn some pennies and escape her family, who sounded very nightmarish.  Nick and Maddie don’t get off to the best of starts but as time marches on, they start to find out more about each other and discover that they have more in common than they might have thought.  Maddie and Nick are both kind, generous, compassionate, sensitive, supportive, practical, funny and both would be there in a heartbeat if they thought that you needed a hand or that you needed a shoulder to cry on.  I kept everything crossed that the two of them would realise just how well they are suited to each other and that they would find the happiness that they so deserve.  Do they do just that?  Well that would be telling and to find out the answer you are just going to have to read the book for yourselves to find out, as I am not going to tell you.

It didn’t take me long at all to get into this book.  In fact, by the time I got to the end of the first page, I knew that this was going to be a book that I wouldn’t be able to put down very easily.  So it proved to be.  As soon as I began to read, I immersed myself in the story and I soon became addicted to reading it.  I would pick the book up only intending to read a couple of chapters but that intention soon flew out of the window as I was still sat there reading half a dozen chapters later.  I just had to keep reading to find out what happened to Maddie and Nick and whether or not they did get together.  The pages seemed to turn increasingly quickly as my desperation to find out what happened to Maddie and Nick increased.  All too quickly I reached the end of the book which I was so disappointed about.

‘The Secret Cove In Croatia’ is well written.  Julie has a writing style that is easy to get used to and easy to get along with.  She draws you into the story from the first word onwards and she entices you to keep reading.  Julie has created such realistic characters that I couldn’t help but feel as though they were just as real as you or I.  They seemed so real that I began to think of Nick and Maddie as friends.  Julie uses such powerful and vivid descriptions that I began to feel as though I was part of the story myself.

In short, I thoroughly enjoyed reading ‘The Secret Cove In Croatia’ and I would definitely recommend this book to other readers.  I can’t wait to read what Julie comes up with next.  Here’s hoping that we don’t have too long to wait but whilst I wait I will definitely be reading the rest of Julie’s books.  The score on the Ginger Book Geek board is a very well deserved 5* out of 5*..