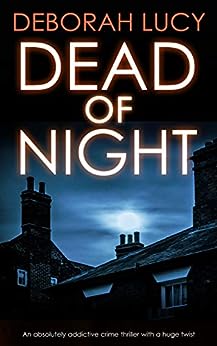 A MACABRE KILLER WORKS IN THE DEAD OF NIGHT. HE’S VERY GOOD – NO ONE SEES HIM.

14-year-old local girl, China Lewis is reported missing by her friend Amy. Detective Inspector Temple is tasked to find her. The more he discovers about China, the greater the danger he knows she’s in.

Temple needs to find her and fast. But when his past suddenly catches up with him and two more girls go missing, it becomes personal. Temple’s quest to find the girls takes him into an evil world of exploitation and it seems he’s the only one who really cares.

Temple has to take a gamble that risks the lives of the girls he’s trying to save. As he uncovers police corruption, he is forced to work in the shadows. Who can he trust now?

TIME IS RUNNING OUT TO SAVE THEM.

I absolutely love discovering new authors and Deborah Lucy is definitely a new author to me.  I read the synopsis for ‘Dead Of Night’ and I couldn’t wait to start reading as it sounded just my kind of read.  Oh my word, ‘Dead Of Night’ is one hell of a read and I thoroughly enjoyed reading it, but more about that in a bit.

What can I say about Detective Inspector Temple?  He is in a bit of a pickle career wise as he is the subject of disciplinary action.  He’s waiting for the decision which could end his career and his whole future rests on this action.  Whilst he waits, he is still working and he is placed into a team working with other troublemakers, that the bosses just seem to want to forget about.  Temple is handed a case and he jumps at the chance to escape his current office.  The case he is given is complicated and initially involves the disappearance of a young girl called China Lewis.  However, things soon escalate and two more girls go missing.  At the same time that he is investigating the case, his past also catches up with him.  So he has two different demands on his time.  Temple is blunt, stubborn, irritable, determined, tenacious, compassionate, sensitive and hard working. He knows he has upset some people in the recent past but I get the impression that he just doesn’t care.  I couldn’t help but take to Temple because he reminds me of my late father, who had a fair few personality traits in common with Temple.

Oh my word, ‘Dead Of Night’ has to be one of my favourite books of the year so far.  I was under the book’s spell from the moment I picked the book up until the moment I read the last word on the last page.  For me, the book was simply unputdownable.  The book wasn’t exactly glued to my hand but it might as well have been because it came everywhere with me.  Woe betide anybody who tried to take the book out of my hands.  It was as if I feared missing out on some vital clue or missing out on some gossip if I was to put the book to one side.  I soon got into the story and it didn’t take me long at all to become addicted to reading this book.  I couldn’t read the book in one burst because real life got in the way (boo) but I did binge read it over the course of a couple of days.  If I had to stop reading for any reason then I immediately looked forward to being able to pick the book up again.  All too soon, I got to the end of the book which I was so disappointed about.  I was enjoying the author’s writing style, the characters and the storylines so much that I just wanted the book to continue on and on.

‘Dead Of Night’ is really well written.  The author’s writing style does take a little while to get used to because it is a bit wordy to start with, but I soon got used to it.  Deborah Lucy has one of those writing styles that is easy to get along with and easy to get used to.  She draws you into the story from the first word on the first page and she dangles enough bait in front of you to keep your interest and to encourage you to keep reading.  Deborah uses such powerful and vivid descriptions that I began to feel as though I was part of the story.  I felt as though I was Temple’s sidekick.

Reading this book was like being on an unpredictable and at times scary rollercoaster ride with several twists and turns along the way.  There were times that I almost had to read through my fingers as I feared what was about to happen.  At times I didn’t want to turn the page just in case danger lurked over the page.  Then I had to kick myself and remind myself that if I wanted to know how the story concluded then of course I had to read on.

In short, I thoroughly enjoyed reading ‘Dead Of Night’ and I would definitely recommend this book to other readers.  I can’t wait to read what Deborah comes up with next.  Here’s hoping that we don’t have too long to wait.  Whilst I wait I will definitely be reading Deborah’s other book just as soon as I can.  The score on the Ginger Book Geek board is a very well deserved 5* out of 5*.