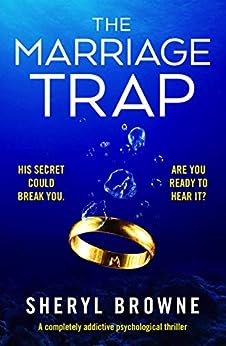 My husband has been keeping secrets for a long time. He thinks I don’t know what he does outside of this house. But I know everything…

Karla watches silently as Jason hurriedly packs his belongings into a suitcase. She knows that her stillness is unnerving him as she watches his every move from the doorway of their bedroom.

Clothes are screwed up and packed into the case, along with a watch she bought him for his last birthday and his precious laptop. He takes everything from his bedside table. Everything except the framed wedding photo, which now stands alone. Karla strains to see the smiling faces in the photo. If only she knew then what she knows now.

‘I’ve fallen in love with someone else,’ he’d said to her, just moments earlier. The brutality of those words hit Karla hard and she struggled to breathe as she took in each word in turn.

You may think you know what Karla will do next. But you’ll be wrong. Because Karla isn’t who you think she is. Only she knows what’s about to happen. And you will never see it coming.

I have been a fan of Sheryl’s for a while now.  I have read, reviewed and enjoyed each of the books that she has released.  She has a knack of writing psychological thrillers that can mess with your head a bit and ‘The Marriage Trap’ certainly messed with my head.  Saying that though, I thoroughly enjoyed reading it but more about that in a bit.

I loved the range of characters in this book.  One of the main characters is called Karla and she is the wife of somebody, who has just decided that he is leaving her for another woman.  I wasn’t sure how to take Karla and I certainly didn’t trust what she said.  There was something about her that set little alarm bells ringing for me.  That could just be me being over cautious of course, but then I do believe nobody and suspect everybody!!  I can’t say that I warmed to Karla but that’s okay because it meant that I could study her from a distance.

It took me a little while to get into this story but that could have more to do with me being tired and shouldn’t be taken as a criticism of the author.  Once I got into the story then whoosh off I went.  After a bit of a slow start, I couldn’t get enough of this story.  I was interested to see how the story panned out and as a result I couldn’t turn the pages quick enough.  At one point the pages were turning that quickly that it was almost as if they were turning themselves.  All too soon, I reached the end of the story, which I was disappointed about.  I wasn’t disappointed with how the story ended but I was enjoying the characters, the storylines and the author’s writing style so much that I just didn’t want the book to end.

‘The Marriage Trap’ is well written.  The author has a writing style that is easy to get used to and to get along with.  Sheryl can easily turn a story on its head with very little effort.  I smugly thought that I had worked out what was going to happen but then bam, Sheryl would introduce a twist which changed the course of the story.

Reading ‘The Marriage Trap’ was very much like being on a scary and unpredictable rollercoaster ride with more twists and turns than you would find on a ‘Snakes & Ladders’ board.  Just when you thought that the action had settled then whoosh off it would go again.  Overall I was gripped by the story and on occasion I was sat on the edge of my seat.

In short and overall I did enjoy reading ‘The Marriage Trap’ and I would recommend it to other readers.  It’s not my favourite of Sheryl’s books but it is still an enjoyable read with twists that you won’t see coming.  I can’t wait to read what Sheryl comes up with next.  Here’s hoping that we don’t have too long to wait.  The score on the Ginger Book Geek board is a very well deserved 4* out of 5*.