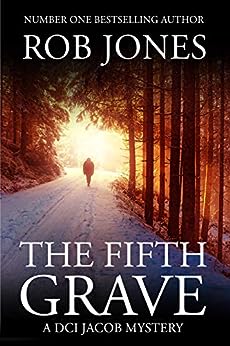 Poised to return to work after a long bereavement leave, Detective Chief Inspector Jacob is called away from the sanctuary of his home to attend the grim discovery of human remains over a quarter of a century old. Found deep in woodland with its own grim history, they give little up, but he is soon confronted with local gossip of hauntings and witches.

The mystery deepens when a second person is murdered in the same woods, and Jacob soon realises he is hunting a killer who will stop at nothing to keep the darkest of secrets buried in the past. Working alongside Dr Sophie Anderson, a criminal psychologist with her own damaged past, they close the net until tragedy strikes again in this gripping romantic suspense thriller.

If there’s one thing that this Ginger Book Geek likes, it’s discovering new authors.  Rob Jones is definitely a new author for me.  Judging by how much I enjoyed reading ‘The Fifth Grave’, I will definitely be reading more of Rob’s work.  I thoroughly enjoyed ‘The Fifth Grave’ but more about that in a bit.

What can I say about Detective Chief Inspector Jacob?  To start with he is a bit of a mysterious figure.  When the story starts, he is just about to go back to work following an extended period of compassionate/ bereavement leave.  His partner died in a fire and he was deeply affected as you can perhaps imagine.  He carries a great deal of guilt around with him because he is convinced that he was meant to die in the fire.  He is called in ahead of his planned return to work to investigate the case of a body that has been found in the woods.  Jacob is the sort of detective that you would want to investigate a case involving you or a member of your family or a close friend.  Jacob is determined, stubborn, persistent, tenacious, strong, fair and he certainly doesn’t suffer fools gladly.  He tolerates his superiors but I get the impression that whilst he might have a neutral look on his face, he is really thinking of slapping them silly with a wet fish or his internal monologue is saying very rude words.  Jacob has a keen eye for detail and he has the knack of being able to spot the little details or clues or evidence that others would easily miss.  Will Jacob manage to solve the case of the bodies in the forest?  Well for the answers to those questions and more you are just going to have to read the book for yourselves to find out, as I am not going to tell you.

It took me a little while to get into this story but that has more to do with the fact that I was tired and not concentrating properly and it isn’t meant as a criticism of the author.  However once I got into the story that was it- all plans had to be cancelled for the rest of the day (not that I had any exciting plans but the sentiment is the same) as I knew that I would find it very difficult to put the book down.  So it proved to be.  Reading ‘The Fifth Grave’ became an addiction and I was in desperate need of my next fix.  If life got in the way and I had to put the book to one side for any reason, then I would immediately look forward to being able to pick the book up again.  Whilst I was reading, several questions formed in my head that could only be answered by continuing to read and getting deeper into the story.  I would pick the book up only intending to read a couple of chapters but I would still be sat there an hour later after having read a lot more than a couple of chapters.  It didn’t seem to take me long to get to the end of the book which I was so disappointed about.  I don’t mean that I was disappointed with how the story ended because that couldn’t be further from the truth but I was enjoying the author’s writing style, the characters and the storylines that much that I just wanted the book to continue.

‘The Fifth Grave’ is brilliantly written.  The author certainly knows how to grab your attention from the start, he draws you into the story from the first word on the first page and he keeps your attention throughout the story.  He writes so convincingly and describes thing so realistically that I felt as though I was Jacob’s sidekick and I was part of the story myself.  I even found that I was trying to give him suggestions as to what to look at next or what to investigate next.

I just have one minor little correction to make.  In this book, the author has referred to a ‘Criminal Records Bureau’ check which is the incorrect name for it.  In December 2012, the ‘Criminal Records Bureau’ merged with the ‘Independent Safeguarding Authority’ to form the new ‘Disclosure & Barring Service’.  The CRB check became a DBS check.  How do I know this?  Well in a previous work life I had the misfortune to work at the Independent Safeguarding Authority but that’s a whole different story for a different day.  Anyway back to the review I do go.  The incorrect name for the check is just needed a teensy weeny little correction and I know pointing it out might make me seem very picky or petty.

Reading this book was most definitely a pleasure and not a chore.  There were twists and turns aplenty and several surprises along the way.  I smugly thought that I had worked out who had done what, only to be sent a curveball and I realised that the real culprit was somebody else entirely.  This book has a bit of everything within its pages.  There’s drama in spades with a hint of romance and a dash of humour.  This is one of those books that had me gripped throughout and it kept me on the edge of my seat all the way through the book.

In short, I thoroughly enjoyed reading ‘The Fifth Grave’ and I will most definitely be recommending this book to other readers.  I can’t wait to read what Rob comes up with next.  Here’s hoping that we don’t have too long to wait but whilst I wait I will definitely be reading Rob’s other books just as soon as I can.  The score on the Ginger Book Geek board is a very well deserved 5* out of 5*.