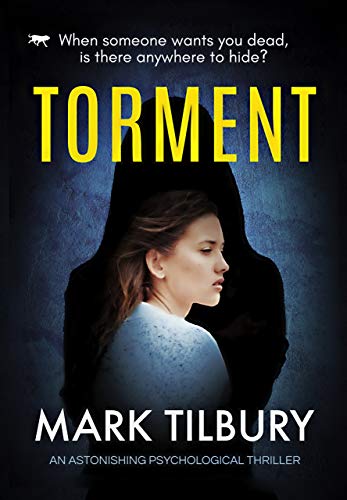 When someone wants you dead, is there anywhere to hide?

Who can you really trust?

Beth couldn’t be happier. She is eight weeks pregnant and married to the man of her dreams. But after returning home from a celebratory meal, she finds a wreath from her sister’s grave hanging above the bed and a kitchen knife embedded in her pillow. There are no signs of a forced entry. Nothing is stolen. And no one other than the cleaner has a key to the house.

Then a campaign of terror begins. Beth becomes increasingly paranoid as it becomes clear that someone close to the family is behind these disturbing events.

But who would want Beth dead?

Does the past hold the clue?

And can Beth find the answer before it’s too late?

I have been a fan of Mark’s work for a couple of months.  In fact I became a fan of his when I had the good fortune to be invited to take part in the blog tour for his last book.  I read the synopsis for ‘Torment’ and it certainly sounded like just my kind of read- a psychological thriller with a twist.  I eagerly started to read and oh boy I was not to be disappointed.  ‘Torment’ is one hell of a read that I thoroughly enjoyed, but more about that in a bit.

I don’t know what to make of Beth, who is the main female character in this book.  I kept changing my mind about her and alternated between wanting to slap her and wanting to give her a hug.  I really did feel for her as regards her desperation for a baby and the fact that she had had a couple of miscarriages, which had made her super nervous about her current pregnancy.  I haven’t had a baby or a miscarriage but somebody close to me has and I know how the failed pregnancies affected them, so I could see where Beth was coming from in that sense.  However I did think that Beth was a bit too trusting and naïve where people were concerned.  A certain person, claiming to be her friend, displays some behaviours that she knows will fire up Beth’s paranoia, will make her (Beth) feel very unsettled and Beth will see dangers where they aren’t any or they are not as bad as Beth thinks they are.  In other words, Beth will be catastrophising.  (I hope that I have spelt that word correctly).  Beth ends up afraid of her own shadow and incredibly jumpy which is completely understandable.  I do think that Beth is very gullible too and that is when she made me want to slap her with a wet flip flop.

Oh my , Mark has done it again and written one hell of a book that I just couldn’t put down.  The book wasn’t exactly glued to my hand but it might as well have been because it travelled everywhere with me.  I was totally gripped by the story and on the edge of my seat throughout the story.  Reading ‘Torment’ became a serious addiction and I was like an addict in constant need of her next fix.  If I had to put the book to one side then I would immediately look forward to being able to pick the book up again.  I found every excuse under the sun to avoid having to move out of my favourite reading spot.  I had to keep reading to see how the story panned out, to see whether or not Beth would have the baby she was so desperate for and whether or not a certain individual was found out or not.  The pages turned increasingly quickly as my desperation to find out what happened grew.  I managed to binge read the book over the course of a day and evening, which is pretty good going for me.  Usually I have the attention span of a gnat and I am easily distracted but not in this case.  My sole focus was on the book and I was able to shut out all other distractions.

‘Torment’ is superbly written but then I wouldn’t expect anything else from Mark Tilbury.  He certainly knows how to grab your attention from the start and he reels you in.  Once he has your attention, he won’t let it go until the end of the story.  For me, the book was perfectly paced- a bit on the slow side to start with but then the tension built and built until a tense and dramatic conclusion towards the end of the book.  Mark described the characters so well and so realistically that they seemed to be just as real as you or I.  I felt like I was a character in the book at one point and I felt as though I was ‘living’ the story.  Yes before anybody shouts, I know that this book is fiction and therefore not real but I find that if I enjoy a book as much as I enjoyed ‘Torment’, I tend to live the story as if it is real.

Reading ‘Torment’ was much like being on a scary and unpredictable rollercoaster ride with lots of twists and turns along the way.  If you want a book that will make your blood pressure soar, your heart rate increasing and your nervousness rising then ‘Torment’ is the book for you.  There were times whilst reading this book that I found myself holding my breath in anticipation of what was going to happen next.

In short, Mark Tilbury has done it again and written one hell of a book that is destined for the bestseller charts and that is nothing less than he deserves.  I can’t wait to read what he comes up with next.  Here’s hoping that we don’t have too long to wait.  The score on the Ginger Book Geek board is a very well deserved 5* out of 5*.