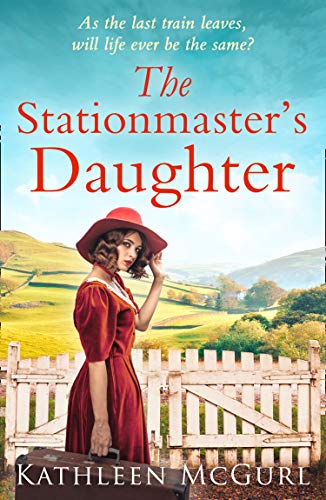 Dorset, 1935. Stationmaster Ted has never cared much for romance. Occupied with ensuring England’s most beautiful railway runs on time, love has always felt like a comparatively trivial matter. Yet when he meets Annie Galbraith on the 8.42 train to Lynford, he can’t help but instantly fall for her.

But when the railway is forced to close and a terrible accident occurs within the station grounds, Ted finds his job and any hope of a relationship with Annie hanging in the balance…

Present day. Recovering from heartbreak after a disastrous marriage, Tilly decides to escape from the bustling capital and move to Dorset to stay with her dad, Ken.

When Ken convinces Tilly to help with the restoration of the old railway, she discovers a diary hidden in the old ticket office. Tilly is soon swept up in Ted’s story, and the fateful accident that changed his life forever.

But an encounter with an enigmatic stranger takes Tilly by surprise, and she can’t help but feel a connection with Ted’s story in the past…

I have a little and rather embarrassing confession to make.  Although I have a couple of Kathleen’s books on my mountainous ‘To Be Read’ mountain, I haven’t actually read one yet.  Well judging by how much I enjoyed reading ‘The Stationmaster’s Daughter’, I can guarantee that her books will not be on that mountain for much longer.  I thoroughly enjoyed reading ‘The Stationmaster’s Daughter’ but more about that in a bit.

Oh my goodness, ‘The Stationmaster’s Daughter’ was certainly one hell of an emotional read for me for reasons that I explained in my look at the characters.  I found that I empathised with Tilly and I just had to keep reading to see what fate had in store for her.  I felt for Ted as regards his loneliness and again I had to keep reading to see if he found happiness.  I didn’t read this book over the course of a day but I had to read it over a few days, because I found that I was becoming too emotionally involved in the story and I would have to put the book to one side for a while.  The pages turned increasingly quickly as my desperation to find out what happened steadily grew and grew.  All too soon I reached the end of the story which I was so disappointed about.  I don’t mean that in a negative way but I was enjoying the author’s writing style, the characters and the storylines so much that I just wanted the story to continue on and on.

‘The Stationmaster’s Daughter’ is beautifully and sensitively written.  ‘The Stationmaster’s Daughter’ is written using two different timelines.  One timeline deals with Ted and his life and the other timeline deals with Tilly and her life.  At first it isn’t immediately apparent as to how the two timelines are linked but as time goes on the link between the two timelines becomes clearer.  This way of telling the story really works, the different chapters interlink really well and the story flows seamlessly as a result.  The author certainly knew how to grab my attention from the start and she kept that attention all the way through the book.  Kathleen writes so realistically that I began to feel as though I was part of the story myself.  I even found that I was trying to interact with the book.  Yes I know the story is fictional and not real but if I enjoy a book to the extent that I enjoyed reading ‘The Stationmaster’s Daughter’, I tend to ‘live’ the story as if it were real.  Kathleen deals with some pretty tough topics within the story but she deals with them with great sensitivity and compassion.

Reading this book certainly took me on one hell of an emotional rollercoaster.  I found that whatever the characters went through, I went through and my emotions mirrored the emotions of the different characters.  I found myself welling up with tears on several occasions and at times there was nothing I wanted to do more than jump inside the pages of the book to give certain people a hug.

In short, ‘The Stationmaster’s Daughter’ is an emotional and haunting read and I would definitely recommend this book to other readers.  I can’t wait to read what Kathleen McGurl comes up with next.  Here’s hoping that we don’t have too long to wait but whilst I wait I will definitely be reading Kath’s books that are currently on my ‘TBR’ mountain just as soon as I can.  The score on the Ginger Book Geek board is a very well deserved 5* out of 5*.