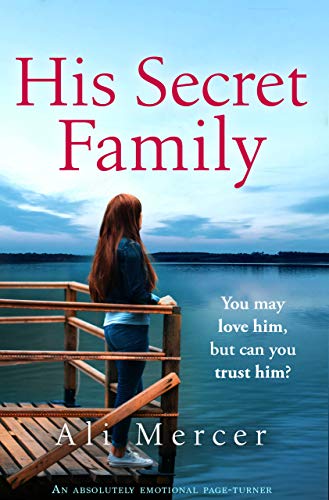 It’s a beautiful day for a wedding. White roses scent the air and the summer sunlight streams in. A spoon chimes against a champagne flute and the room falls silent. And there he is – my husband – getting to his feet to propose a toast. He’s still handsome. His new wife is next to him, gazing upwards, oblivious.

I’m not supposed to be here. All these years in the same town and I had no idea until I saw his name on the seating plan. He lived with me, once. Loved me. Small-town memories are long, but the people in this room don’t want to remember.

They say the healing is in letting go, but after what he did, he needs to know we haven’t gone away just because he’s shut his eyes.

So I take Daisy by the hand and step forward from the shadows. He notices us and his eyes widen. The champagne glass falls from his hand and smashes. Then he sags forward, making a terrible sound – a sort of strangled scream…

I read the synopsis for ‘His Secret Family’ and it certainly sounded like a very intriguing read.  So it was with some enthusiasm that I dived straight in.  I did enjoy the book but more about that in a bit.

I found the characters to be interesting but not always likeable.  I can’t say that I warmed to any of them but that wasn’t such a bad thing because it meant that I didn’t favour one character over the other.  I don’t really want to go into the specifics of each character because I would hate to give too much away and spoil the read for anybody else.  What I will say is that the level of the deceit that one of the characters go to to maintain their secret is truly shocking but sadly not surprising.  Why is it not surprising?  I happen to have a relative who had two families and was bigamously (so therefore not legally) married to my great grandmother.

It took me a little while to get into this book.  It isn’t a particularly fast paced book and for me, it was a little slow to get going.  However, once I got into the story that was it, I just couldn’t get enough of the story.  I had to keep reading to see if the story panned out as I suspected it would.  In some respects it did and in others it didn’t.  The further into the story I got, the more I wanted to read and the quicker the pages were turning.  I would say that I raced through the last quarter of the book.

‘His Secret Family’ is well written.  The story is told from the perspectives of four characters and each chapter is voiced by one of the characters.  I did wonder if this might prove to be a bit confusing but it didn’t.  In fact this way of telling the story worked really well and the story flowed seamlessly as a result.  The author certainly grabbed my attention with an event that could quite easily have come from any one of a number of soap operas- that of a wedding that is interrupted by a woman, who isn’t exactly well received by the groom if you get my drift.  Ali writes so realistically and vividly that I really did feel as though I was part of the story myself and that I was an extra guest at the wedding!

In short, ‘His Secret Family’ was most definitely an interesting read that gripped me once I got into the story as it were.  I would recommend this book to other readers and particularly to those readers who prefer a slower pace of story telling.  I will definitely read more of Ali’s future work.  The score on the Ginger Book Geek board is a very well deserved 4* out of 5*.