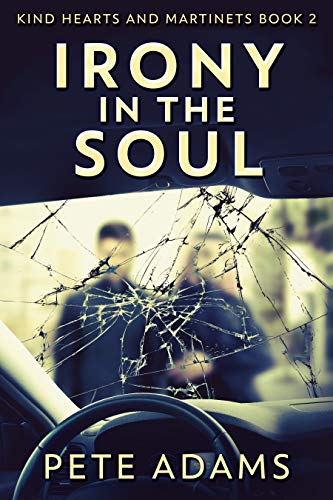 Recuperating from his past mission, disturbed but driven D.I. Jack Austin returns to work amid a personality clash with a retired colonel – who happens to be his new Chief Constable.

When the Constable is kidnapped – and returned in pieces – DI Austin’s hapless hunt for the culprit begins. He investigates a string of cryptic murders including a beheaded minister, a drowned woman in a Hijab, and a band of terrorists with explosives.

Meanwhile, Austin battles a grievous inner conflict. Will he thwart the perpetrator, or become a conspirator himself?

I have heard lots of good things about Pete’s books and so when I was offered the chance to read and review ‘Irony In The Soul’, I just knew I had to accept the offer.  It was certainly a ‘different’ sort of a read, which I thoroughly enjoyed but more about that in a bit.

To say that Detective Inspector Jack Austin is eccentric is an understatement.  I wasn’t quite sure how to take him at first as he seemed a bit too eccentric but I soon got used to him and I soon took to him.  I would say that he is a one off although his bosses might say ‘thank goodness’.  Austin has just returned to work following the trauma of a previous case which affected him mentally and physically.  That trauma hasn’t gone away but he just seems able to cope with it better and he is determined to use that trauma to drive him forward in his role.  Austin has a way with words, which isn’t always appropriate but it just made me like him all the more!!  Austin has a bit of a personality clash with the new chief constable, who is ex military.  That personality clash doesn’t last for long as the chief constable is kidnapped and mutilated.  Austin is tasked with finding out who killed the chief constable and why.

Oh my word, ‘Irony In The Soul’ was definitely a different sort of read and I mean that in the nicest possible way.  It didn’t take me long at all to get into this story and I soon became addicted to reading it.  I found it extremely difficult to put the book down as I feared missing out on some vital clue or piece of gossip if I put the book down for very long.  The book wasn’t exactly glued to my hand but it might as well have been because it travelled everywhere with me.  I didn’t realise just how quickly I was getting through this book until I looked up to check and I was staggered to realise that I had been reading for a couple of hours and I had cleared over 20% of the book.  I was enjoying the characters, the storylines and the author’s writing style that I lost all track of time.

‘Irony In The Soul’ is well written.  Pete certainly has a way of grabbing your attention from the start and once he had my attention, he didn’t let it go throughout the book.  Pete has a different sort of writing style which took a little getting used to.  Different is good and Pete’s different writing style certainly makes this book stand out from the rest in the crime genre.  Pete writes so realistically and vividly that I felt as though I was part of the story myself.  I loved the banter which regularly flew between the characters and at times I just had to chuckle at what was said.

In short, I thoroughly enjoyed reading ‘Irony In The Soul’ and I would definitely recommend it to other readers.  This book has a bit of everything- there’s drama, action and humour in abundance with a side helping of romance.  I enjoyed ‘Irony In The Soul’ so much that I am definitely going to read the others in the ‘Kind Hearts & Martinets’ series just as soon as I can.  The score on the Ginger Book Geek board is a very well deserved 5* out of 5*.