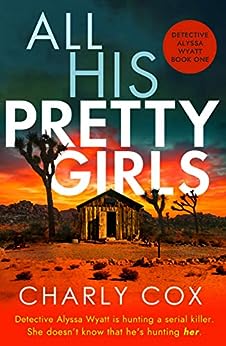 She doesn’t know that he’s hunting her.

A woman is found naked, badly beaten and barely alive in the New Mexico mountains. The shocking discovery plunges Albuquerque Detective Alyssa Wyatt into a case that will test her to the limit.

It appears that Callie McCormick is the latest plaything of a shadowy psychopath that leaves a long shadow on the streets of New Mexico – an individual linked to a string of deaths but leaving no evidence.

But when Alyssa makes a breakthrough that just might reveal the killer, she unknowingly puts herself in the crosshairs of a brutal maniac – one with an old score to settle.

Because the killer knows Alyssa very well, even if she doesn’t know him. And he’s determined that she’ll know his name – even if he has to extract his deadly revenge on her and everything she loves.

I found the character of Detective Alyssa Wyatt to be a very interesting one.  Alyssa is different to a lot of Detectives in the fact that she has a happy and settled home life with her husband and her two children.  Quite often in other books most detectives seem to be so dedicated to their work that their personal lives suffer, but not in this case.  She also has a close personal working relationship with her work partner too.  There’s nothing going on between them but I think that they share an almost sibling like relationship in that they bicker at times but they know that in times of trouble each will have the other’s back.  Alyssa has suffered some personal trauma in the past, which has affected her greatly and this experience ultimately led to her becoming a detective in the first place.  Alyssa is kind, compassionate, sensitive, determined, occasionally stubborn and she is like a dog with a bone in the sense that if something doesn’t seem right then she will not let it go until the matter has been investigated fully and her curiosity has been satisfied.  Alyssa was a likeable character and I look forward to learning more about her in future books in the series.

It didn’t take me long at all to get into this story.  In fact by the time I got to the end of the first page, I knew that I would find it extremely difficult to be parted from the book for any length of time.  So it proved to be.  I would pick the book up only intending to read a couple of chapters and I would still be sat there reading over half a dozen chapters later.  I became so wrapped up in the story that I lost all track of time and when I looked up to check how much I had read, I was staggered to realise that I had been reading for at least two hours.  I think part of the attraction was the fact that the lead detective was just so likeable that I began to think of her as a friend and I had to keep reading to make sure that she finished the story in one piece.  The pages turned over very quickly and I seemed to charge through the story.  I was disappointed when I got to the end.  I don’t mean that I was disappointed with how the story ended but I was enjoying the characters, the storylines and the author’s writing style so much that I just wanted the book to continue.

‘All His Pretty Girls’ is extremely well written.  Charly grabs your attention from the start and once she has hold of that attention then she won’t release it or you until you get to the last word on the last page.  Charly describes the events in the book so realistically that I felt as though I was part of the story myself and I was helping Alyssa solve the case.  Everything that the characters went through, I went through.  For me, this book was well paced.  The story starts with a bang, it hits the ground running and maintains the pace throughout.

Reading ‘All His Pretty Girls’ was like being on a scary and unpredictable rollercoaster ride with several twists and turns.  This was one of those books that had me totally gripped and I was on the edge of my seat throughout.

In short, ‘All His Pretty Girls’ is a cracking start to what I hope will become a long term series.  I can’t wait to work on more cases with Detective Alyssa Wyatt.  I would definitely recommend this book to other readers and particularly to those readers who enjoy stories featuring strong female detectives.  The score on the board just has to be 5* out of 5*.