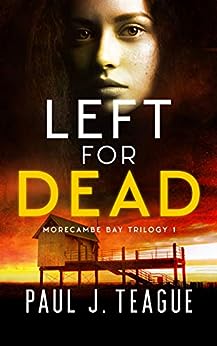 A return to the past. Two guilty secrets. A memory that won’t stay buried …

When Charlotte and Will Grayson return to the seaside resort where they met as teenagers, they hope it’ll help to heal the wounds in their marriage.

But visiting the dilapidated holiday camp where their relationship began brings terrible memories back from the past.

The man who’d once made their lives hell has come back to find them – only, the last time they saw him, they’d left him for dead on the beach.

As the threats to their new life become more severe, Charlotte and Will discover that they were mistaken about what happened to Bruce Craven on that fateful night.

And now he’s returned to finish off what was started thirty years ago.

Sometimes the past is best left alone….

It didn’t take me long at all to get into this story.  In fact by the time I got to the end of the first couple of pages, I knew that this was going to be the sort of read I enjoy.  A psychological type thriller with elements of scariness and with several twists and turns along the way.  ‘Left For Dead’ certainly fulfilled that limited criteria.  I became addicted to reading this book.  I would pick the book up only intending to read a couple of chapters but I became so immersed into the story that I would still be sat there over an hour and several chapters later.  Usually I have the attention span of a gnat and I am easily distracted but not in this case.  I was so focused on the book and on the story itself that I was able to shut out all other distractions.  In fact the world outside could have ended and I would have known nothing about it.  It didn’t take me long to get through the book which I was disappointed about.  I realise that it sounds negative but I don’t mean it that way.  I was enjoying the author’s writing style, the characters and the storylines so much that I just wanted the book to continue.

‘Left For Dead’ is well written.  The author certainly knows how to grab your attention from the start and how to draw you into the story.  That’s how I felt at any rate.  Paul then takes you on one hell of a journey.  Paul writes so realistically and uses such vivid descriptions that I felt as though I was part of the story myself.  I also found that I became far too involved in the story to the extent that I wanted to jump inside the pages of the book to ‘deal’ with the chief baddie.  I know that this is a work of fiction but I find that if I enjoy a book to the extent that I enjoyed this one then I tend to ‘live’ the story as if it were real.

Reading ‘Left For Dead’ was like being on a very scary and unpredictable rollercoaster ride with several twists and turns along the way.  Every so often I almost had to read through my fingers as I feared what was about to happen as the action intensified.