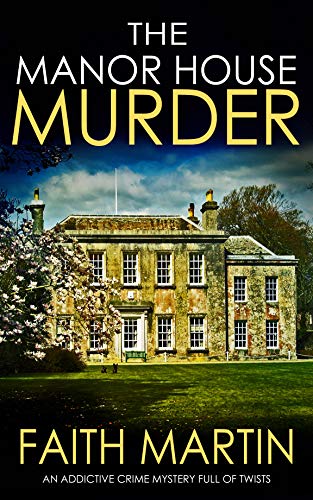 THE WEEKEND TURNS MURDEROUS
Monica Noble and her husband Graham, the local vicar, are invited to participate in a high-flying church conference being held at a swanky manor house hotel in their village.

But when Chief Superintendent Jason Dury arrives on the scene he quickly discovers that it’s a case of murder.

AND MONICA’S HUSBAND IS THE PRIME SUSPECT

Other suspects include an eminent bishop, an archdeacon viciously opposed to female clergy, and his wife, the curator of a local museum, who is definitely up to something.

But if Monica is to find out who killed Celia, and free her husband from suspicion, she must grapple with a very ruthless — and increasingly desperate — killer, putting herself and those around her in mortal danger.

I have been a fan of Faith’s for a fair while now.  I love the mysteries that she has released with Joffe Books and latterly with HQ.  It has been my distinct pleasure to have read and reviewed all of Faith’s books to date.  I have enjoyed every single one of her books.  Her most recent release with Joffe Books is ‘The Manor House Murder’, which is the third book to feature the amateur sleuth and vicar’s wife, Monica Noble.  ‘The Manor House Murder’ was released on 8th November 2019.  Faith has done it again and she has written one hell of a book, which I thoroughly enjoyed, but more about that in a bit.

What can I say about Monica Noble?  She is the wife of the local vicar and the mother to a teenage girl.  Her husband is step-father to her daughter.  She takes on the traditional role of vicar’s wife but she is also an amateur sleuth with an ability to find out information that the police could only dream of.  Monica sounds like a nice lady, who would be impossible to dislike.  Yes she is a vicar’s wife but she is also a feisty, modern and occasionally stubborn woman in her own right.  She sounds as though she would be a good friend to have.  If she saw anybody struggling then she would be the first to offer a shoulder to cry on and a therapeutic cup of tea.  She became an amateur sleuth accidentally and it’s not a role that she encourages.  I am not sure that the members of her husband’s parish are altogether happy with his choice of wife as they seem to look down on her far too much for my liking.

As with all of Faith’s books I was drawn into the story from the first word on the first page and that was it, I was hooked.  Reading ‘The Manor House Murder’ became addictive.  I just couldn’t get enough of the story.  I seemed to race through the book as my desperation to find out how the investigation panned out steadily grew and grew.  This book isn’t particularly long and so it didn’t take me all that long to finish reading it.  Once I started to read the book, I lost all track of time because I was concentrating so hard on the story.

‘The Manor House Murder’ is well written but then so are all of Faith’s books.  I find that she has a writing style that is easy to get used to and easy to get along with.  She draws you in and once she has your attention, she will not let it go until the moment you close the back cover as it were.  Faith has a way of making you feel as though you are part of the story yourself.  That’s how I felt at any rate.

In short, I thoroughly enjoyed reading ‘The Manor House Murder’ and I would definitely recommend it to other readers.  I will definitely be reading more of Faith’s work in the future.  The score on the Ginger Book Geek board is a very well deserved 5* out of 5*.