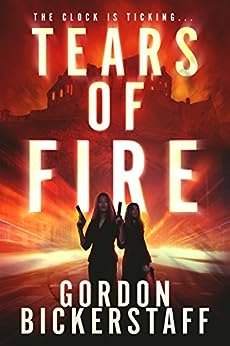 Conspiracy. Espionage. Spy Story.
Two serial killers have been getting away with murder for years. For them, it’s a well-paid hobby while they bide their time. It’s about to stop when everything slots into place for them to leap to the next level. Payback for the people who killed their parents.

Lambeth Group investigator, Gavin Shawlens, is on their trail. But all is not as it seems and he is pushed way out of his depth when the killers turn on his family. Gavin’s Lambeth Group partner, Zoe Tampsin, is cut off from him and fighting her own battle to stay alive.

They need to connect but Zoe will face an impossible choice. Stop the killers before they pull off the most audacious murder that will shock the world and change it forever. Or, rescue Gavin’s family from the jaws of evil.

If there’s one thing that this Ginger Book Geek likes, it’s discovering new authors.  Gordon Bickerstaff is certainly a new author for me.  I read the synopsis for ‘Tears Of Fire’ and it certainly sounded like my kind of read especially when the words ‘conspiracy’ and ‘espionage’ jumped out at me.  I love a good conspiracy and espionage story a la James Bond, especially with Daniel Craig in the lead role.  Anyway I digress so back to the review I do go.  When I sat down and began to read ‘Tears Of Fire’ I had high hopes for the book and I wasn’t disappointed either because ‘Tears Of Fire’ met all those hopes and more.  I thoroughly enjoyed reading it but more about that in a bit.

It didn’t take me long at all to get into this story.  In fact by the time I got to the end of the first half a dozen pages, I knew that I was going to be in for one hell of a rollercoaster read.  I couldn’t get enough of this book and I found it extremely difficult to put this book to one side even just for a nanosecond.  I would pick the book up only intending to read a couple of chapters and fill in a spare half hour or so but I would still be sat there over an hour and a fair few chapters later.  If I had to put the book to one side, I resented having to do so and I would immediately look forward to being able to pick the book up again.  I tried to ration out how much I read in one session so I could prolong my enjoyment of the book but that attempt at rationing was soon thrown out of the window because I was enjoying the book too much to stop reading.  To say that ‘Tears Of Fire’ is addictive reading is like saying that Manchester City are a decent football team- in other words a vast understatement.  I soon got to the end of the story, which I was disappointed about.  I realise that might sound negative to some but what I mean is that I was enjoying the author’s writing style, the storylines and the characters so much that I just wanted the book to continue.

‘Tears Of Fire’ is well written.  Gordon Bickerstaff sure as hell knows how to grab your attention from the start and then take you on one hell of a tense and dramatic adrenaline rush of a journey.  For me ‘The Tears Of Fire’ was better than watching a spy movie because through Gordon’s vivid and realistic descriptions I was able to use my vivid imagination to picture the action taking place in my mind as the story continued.  Gordon’s writing is so good that I actually felt as though I was part of the story myself.  Mind you I wouldn’t make a good spy because I am a big wimp when it comes to anything remotely scary.

In short, ‘Tears Of Fire’ is one hell of a read and I would definitely recommend it to other readers.  I will definitely read more from Gordon Bickerstaff – both his new books and his previous works.  The score on the Ginger Book Geek board is a very well deserved 5* out of 5*.