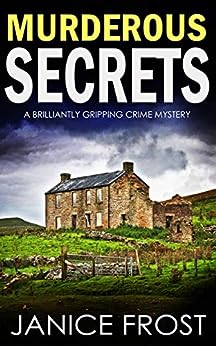 Detective Ava Merry has a knack for spotting trouble, even when she’s off the clock.

She goes to a forties-themed dance at Northfields Farm on Valentine’s Day and discovers a young couple, Nick and Samantha, murdered.

Nick is found dead in a vintage ambulance. Sam is found stabbed multiple times in the glamping tent where they were staying. A man collides with Merry as he flees the scene.

Who is he and is he really innocent?

DI Jim Neal joins the investigation. But everywhere Merry and Neal turn, they are confronted by lies. Then another frenzied murder ups the stakes still further.

CAN MERRY AND NEAL EXPOSE THE KILLER WHEN NO ONE IS WHO THEY SEEM?

I have been a fan of Janice’s work for quite a while now.  In fact I have been a fan since I had the good fortune to pick up one of the earlier books in the series featuring Detectives Neal and Merry.  Since then I have read the rest of the series in order and from the beginning, whilst (im)patiently waiting for Janice to release the next book in the series.  The wait is temporarily over because the latest book in the series is called ‘Murderous Secrets’ and it was released on 14th November 2019.  It really is a cracking addition to the series and I thoroughly enjoyed reading ‘Murderous Secrets’ but more about that in a bit.

What can I say about Detectives Merry and Neal?  They are determined detectives with many years experience between them.  They have a close working relationship and I get the impression that before long they will be close in other ways too if you get my drift.  Neal isn’t sure about having a relationship with Merry because of the implications that could have for their professional lives.  They are loyal to each other and each has the other’s back.  They both work well as part of a team but they also work equally well on their own.  I get the impression that Merry can occasionally be a bit rash and rush into situations without thinking about the potential risks.  Both of the detectives are determined, tenacious, serious, driven but they are also kind, gentle, sensitive and compassionate.  Will Merry and Neal and the other members of the team solve this latest case?  Well for the answer to that question and so much more you are just going to have to read the book for yourselves to find out because I am not going to tell you.

Oh my goodness me, ‘Murderous Secrets’ is one hell of a fantastic addition to the Merry & Neal series.  I was completely under the book’s spell from the moment I opened the front cover until the moment I read the last word on the last page.  Reading this book became a serious addiction.  If I had to put the book to one side for any reason, then I would use every excuse I could find to enable me to get back to the book.  The book wasn’t exactly glued to my hand but it might as well have been because it travelled everywhere with me.  I didn’t want to miss a single second of the story or miss some vital clue in the case.  I had my suspicions as to what was going to happen and how the story was going to conclude so I had to keep reading to see if I was on the right path or if I had the wrong end of the stick.  I managed to binge read the book over the course of a couple of days which is pretty good going for me.  I was disappointed to finish the book because I was enjoying the author’s writing style, the characters and the storylines so much that I just wanted the book to continue.

‘Murderous Secrets’ is superbly written but then I wouldn’t expect anything else from Janice Frost.  She has a writing style that is easy to get used to and easy to get along with.  Janice starts this book in such a memorable way- I honestly cannot think of any other book that starts with a 1940s nostalgia night and ends up with two dead bodies, one of which is in the back of a 1940s ambulance.  Janice compels you to keep reading and I mean that in the nicest possible way.  Janice uses such vivid and realistic descriptions that I really did feel as though I was part of the story myself and another member of Detectives Neal and Merry’s team.

Reading ‘Murderous Secrets’ was much like being on a scary and unpredictable rollercoaster ride with more twists and turns than you would find on a ‘Snakes & Ladders’ board.  Just when you think that you can reclaim your stomach, take a breather and let your nerves settle down then off the action would go again.

In short, ‘Murderous Secrets’ is another fantastic book from Janice Frost.  The series featuring Detectives Merry and Neal just goes from strength to strength and gets better and better.  I would definitely recommend Janice and her books to other readers.  I look forward to reading more of Janice’s work in the future.  The score on the Ginger Book Geek board is a very well deserved 5* out of 5*.