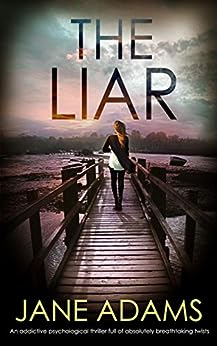 A WOMAN IS FOUND STABBED THROUGH THE HEART.

A dry, hot summer on the Norfolk coast. Former police detective John Tynan falls in love for the first time since his wife died. Then the woman, Martha Toolin, is murdered. But everything he thought he knew about Martha was a lie.

Detective Mike Croft is called in to investigate. John is one of Mike’s oldest friends. The murder brings back memories of their most traumatic case.

THE HUNT IS ON.

Martha was a stranger to the area and was seen arguing that day with a teenage boy. He becomes the number one suspect. But it turns out she was a con artist who exploited the vulnerable and elderly. Even her name is false.

SHE IS A LIAR.

The number of people who might have wanted her dead multiplies. Who was she and what did she want with John Tynan?

A MURDER MYSTERY AND SO MUCH MORE.

And then another body is found on the beach . . .

I have been a fan of Jane’s work for quite a while now- in fact ever since I had the good fortune to pick up a copy of the first book in the Detective Mike Croft series called ‘The Greenway’.  I loved everything about that book and since then I have read each and every book in the series that Joffe Books have released.  The fourth book in the Detective Mike Croft series is called ‘The Liar’ and it was released on 19th November 2019.  ‘The Liar’ is another difficult and intense case for Detective Croft and his team.  I flipping well loved ‘The Liar’ but more about that in a bit.

What can I say about Detective Mike Croft?  He is an experienced detective with many years of experience behind him.  He has been there, done that and worn the t-shirt.  He has a wife and they seem to be quite happily married.  He is popular with his colleagues- both old and new.  He has a few close friends outside of the force but even some of them are former colleagues.  Croft is the sort of police officer that you would want to investigate a case involving either you or one of your loved ones.  He is tough, tenacious, determined, resolute, methodical but he is also kind, compassionate and sensitive.  You can rest assured that when he is allocated a case he will investigate until he has solved the case and the guilty party has been apprehended.  Will Croft and his team be able to solve the case?  Well for the answer to that question and so much more you are just going to have to read the book yourselves to find out as I am not going to tell you.

Oh my goodness, did I enjoy this book or did I enjoy this book?  I think you can probably tell by now that I absolutely loved reading ‘The Liar’.  I didn’t look up from this book from the moment I first picked it up until the moment I closed the back cover as it were.  I became totally wrapped up in this case and I could not even comprehend putting this book down.  I was intrigued on two fronts- firstly about the black animal that was spotted and second about who had killed Martha and why.  The pages turned increasingly quickly as my desperation to find out how the story was going to conclude.  It seemed to take me next to no time to get through the story but then whilst I was reading this book I had lost all sense of time.  Usually I have the attention span of a gnat and I am easily distracted but not in this case because my sole focus was on the book and on the book alone.  The world outside could have ended and I wouldn’t have noticed anything about it.

‘The Liar’ is really, really well written but then I wouldn’t expect anything else from Jane Adams.  She has a knack of starting the story in such a memorable way that you will not forget the book in a hurry.  This book is certainly going to stay fresh in my memory for a long time to come.  Jane draws you into the story from that memorable incident onwards and once she has your attention, she will not let it go until the moment you close the back cover.  Jane writes so realistically and uses such vivid descriptions that I really did feel as though I was part of the story myself and I was another member of Croft’s team.

Reading ‘The Liar’ was much like being on one hell of a scary and unpredictable rollercoaster ride with several twists and turns along the way.  Just when you thought that the action had settled down for a minute so you could gather your thoughts and take a breather then off the action would go again.

In short, Jane Adams has done it again and she has written one seriously fantastic book.  The series featuring Detective Mike Croft just gets better and better.  I will definitely be reading more of Jane’s work in the future.  I would definitely recommend this author and this book to other readers.  The score on the Ginger Book Geek board is a very well deserved 5* out of 5*.