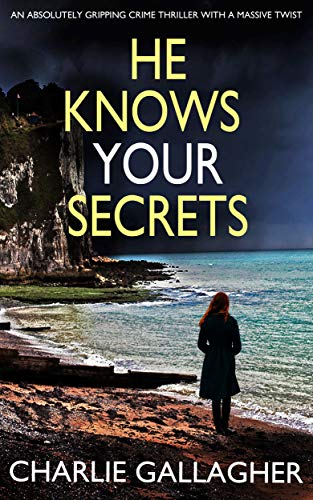 ONE WILL SACRIFICE HER LIFE TO STOP HIM.

ONE IS HIS NEXT VICTIM.

ONE MUST TRY TO PUT HIM BEHIND BARS.

Holly Maguire takes a taxi to a clifftop location. She is determined to make things right. Then the car goes over the edge of the cliff.

As Holly falls to her death, she tightens her grip on a rucksack.

SHE WILL GIVE HER LIFE TO BRING HIM DOWN.

Kelly Dale wakes up to her first day without her mother. Her mum passed away late the previous night after losing a battle with cancer. Kelly receives a text from Holly, sent just before the accident, and rushes to the clifftop. She is too late.

Kelly has lost her mother and girlfriend in the space of a few hours.

Now she must face her own battle to stay alive.

HE WILL KILL KELLY NEXT. HE WANTS TO LIVE-STREAM HER MURDER.

Detective Maddie Ives is called out to inspect the wrecked vehicle. She is under pressure to write it off as a murder-suicide or a terrible accident. Holly was a known sex worker and the running theory is that she may have been engaged in activity with the taxi driver when it rolled over the side.

MADDIE MUST STOP A POWERFUL MAN WHO EXPLOITS AND CONTROLS WOMEN.

It’s a tense and thrilling ride as the net closes in. But time is running out to save Kelly.

I have been a fan of Charlie’s work for a fair while now.  In fact ever since I had the good fortune to be invited to take part in the blog tour or one of Charlie’s previous books.  Since then I have caught up with his previous books, whilst keeping pace with every new book that he has released.  I read the synopsis for ‘He Knows Your Secrets’ and I was immediately intrigued.  The synopsis certainly sounded like just my kind of read.  A fast paced, police procedural, psychological thriller with a twist.  Well, I can definitely say that ‘He Knows Your Secrets’ is all that and so much more.  I thoroughly enjoyed reading ‘He Knows Your Secrets’ but more about that in a bit.

I absolutely loved the character of Detective Maddie Ives.  She is a young, determined, hard working police detective.  Maddie is feisty and almost totally fearless.  She has empathy and she treats the victims of crime with kindness and compassion.  Maddie is in charge of a small team but they all seem to get on fairly well.  Maddie is very tenacious and she is a like a dog with a bone in the sense that if something doesn’t feel right to her she will not hesitate to investigate until every lead has been chased down and she has satisfied her own curiosity.  Maddie often does more than her fair share of the workload.  Maddie works well as part of a team but she works equally well on her own.

It didn’t take me long at all to get into this story.  In fact by the time I got to the end of the first page, I knew that I would find it nigh on impossible to put this book down for any length of time.  Reading ‘He Knows Your Secrets’ became seriously addictive.  I would pick the book up only intending to read a couple of chapters but I would still be sat there reading over a half a dozen chapters and a couple of hours later.  If I had to put the book down for any length of time then I would immediately look forward to being able to get back to what was important- reading ‘He Knows Your Secrets’.  I soon seemed to make my way through the book.  I can’t exactly put a time scale on it because I lost all track of time.  All I do know is that I wish that the book had been longer because I was having such a good time reading it.

‘He Knows Your Secrets’ is brilliantly written but then I wouldn’t expect anything else from Charlie Gallagher.  As he is a serving police officer himself, his books just seem that bit more authentic if that makes sense.  He certainly knows how to grab your attention from the start and he draws you into the story.  The story hits the ground running and maintains the pace throughout.  Charlie writes so realistically and uses such vivid and graphic descriptions that I really did feel as though I was part of the story myself.

Reading ‘He Knows Your Secrets’ felt like being on one hell of a scary and unpredictable rollercoaster ride with several twists and turns along the way.  Just when you thought that you could reclaim your stomach, take a minute to catch your breath and allow your heart rate to go back to normal, then off the action would go again.

In short, Charlie Gallagher has done it again and he has written one hell of a book.  I would definitely recommend this author and his books to other readers.  I will most definitely be reading more of Charlie’s work in the future.  The score on the Ginger Book Geek board is a very well deserved 5* out of 5*.