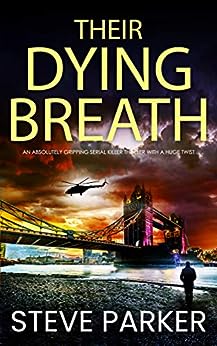 Detectives Ray Paterson and Johnny Clocks attend the scene of a brutal murder on the banks of the River Thames.

Someone’s head is found with a star carved into their forehead. The rest of their body is buried in the mud.

The next day the airwaves are hacked. A live-stream shows a man imprisoned in a box. He also has a star cut into his head.

Then the man is drowned alive in the box.

Paterson and Clocks race against time to make sure their next breath isn’t their last.

But this enemy is far more deceptive and deadly than any they’ve encountered before.

THEY WILL DO ANYTHING FOR REVENGE. WHY?

I have to say that I love the working partnership of Paterson and Clocks.  They are not only work colleagues but they are also very good friends.  Paterson is the more tactful and diplomatic of the two whereas Clocks can be the total opposite.  Clocks tells it how it is and he certainly doesn’t sugercoat certain details.  Paterson is fond of the ladies and he also has been known to have an affair with the wife of a fellow officer.  Paterson is well practised in the martial arts arena, which gives him a bit more of a dangerous edge.  Paterson and Clocks have each others’ backs and they are fiercely loyal to each other.   I loved both characters but I have something of a soft spot for Clocks, who is a bit of a loveable rogue.

It didn’t take me long at all to get into this story.  In fact, by the time I got to the end of the first chapter, that was it, I just knew that nothing would get done for the rest of the day.  I found ‘Their Dying Breath’ to be an addictive read and then some.  I would pick the book up to fill in a spare few minutes but I would still be sat reading over an hour later.  The book wasn’t exactly glued to my hand but it might as well have been because it travelled everywhere with me.  I just couldn’t bear to miss a single second of the story.  The pages turned over at a furious rate the further into the book I got.  I would say that the latter half of the book passed by in a blur.  I just had this desperation to find out how the story concluded and what the conclusion of the story meant for the dynamic detective duo.

‘Their Dying Breath’ is brilliantly written but then I wouldn’t expect anything else from Steve Parker.  The story hits the ground running and maintains the fast pace throughout.  Steve starts the story in a memorable way and then gradually he draws you into the story.  The reader then taken on one hell of an at times scary and unpredictable rollercoaster ride.  Steve writes so realistically and uses such vivid descriptions that I did feel as though I was part of the story myself.  The fact that Steve himself is a former police officer only adds extra authenticity to the story.

In short, I thoroughly enjoyed the fifth outing for Paterson and Clocks.  I look forward to reading more of Steve’s work in the future.  Here’s hoping that we don’t have too long to wait for his next book (hint, hint).  I would definitely recommend this author and this series to other readers.  The score on the Ginger Book Geek board is a very well deserved 5* out of 5*.