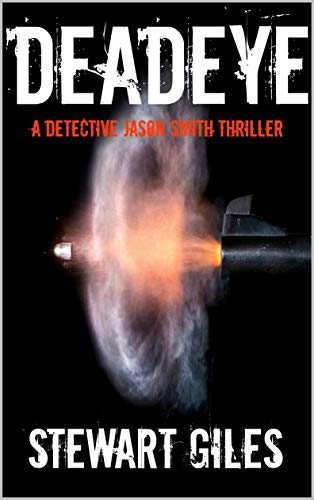 When a man is shot dead in a park not far from where Detective Sergeant  Jason Smith lives, Smith takes it personally. The man was killed in a precise and cold manner. Then, when another victim turns up – also killed with absolute precision, Smith realizes he’s on the trail of a killer who will stop at nothing. Fighting against his team, Smith will have to dig harder than he’s ever dug before to stop the worst killer York has ever seen.

I have been a fan of Stewart’s work for a while now.  He has written quite a few books now.  I have read and reviewed a lot of his books but I still haven’t managed to catch up with all of his work just yet.  Although I have loved everything that he has written, I must admit that I do have something of a soft spot for Detective Sergeant Jason Smith for reasons which I will explain in a bit.  ‘Deadeye’ is the latest book in the DS Jason Smith series and it’s another corker.  I thoroughly enjoyed reading ‘Deadeye’ but more about that in a bit.

What can I say about Detective Sergeant Jason Smith?  Well apart from the fact that I have a soft spot for him and I have claimed him as a relative- well the name Smith does crop up in my family tree so in theory that makes us cousins right?  Anyway enough of my delusions so back to our hero I do go.  Smith is actually Australian but he has strong ties with the York area, as his beloved Grandmother lived there.  Smith was sent to live with his Grandmother after his sister died in an accident in Australia.  I get the impression that Smith’s parents blamed him.  Smith’s Grandmother was definitely an important part of Smith’s life and he was devastated when she died.  Smith has remained in the York area since her death.  Smith had been settled in his life as he had a wife and daughter although following Smith’s indiscretion in a previous book, his wife moved out and took his daughter with her.  Since then Smith has been beating himself up over what happened and he is determined to get them home where they belong.  Smith is certainly a determined detective although he occasionally bends the rules.  Smith just seems to be a trouble magnet and despite everything that Stewart puts him through (the meanie), Smith stands up, dusts himself off and carries on.  However, the cases as described in ‘Deadeye’ test him as he has never been tested before.  Will Smith (my hero and cousin) solve the case, save the day and succeed in bringing his family back home?  Well for the answers to those questions and so much more you are just going to have to read the book for yourselves to find out as I am not going to tell you.

Oh my goodness gracious me, ‘Deadeye’ was another unputdownable, page turner of a book from Stewart.  I was hooked on this book from the moment I read the synopsis, let alone from reading the story itself.  To say that this book was addictive seems to be a massive understatement.  I had to read the book in one long reading binge because I simply couldn’t bear to put the book to one side for any length of time.  The book wasn’t exactly glued to my hands but it might as well have been because it travelled everywhere with me.  I couldn’t bear to miss a single second of the story and besides which I needed to know whether or not Smith (my hero) made it to the end of the book in one piece.

‘Deadeye’ is superbly written but then I find that to be true of all of Stewart’s books.  He manages to grab your attention from the synopsis and he draws you into the story.  Once he has your attention then he will not let you have it back until the moment you finish the last word on the last page.  ‘Deadeye’ was one of those books that gripped me throughout and had me on the edge of my seat throughout, which got a bit uncomfortable at times.

In short, I thoroughly enjoyed reading ‘Deadeye’ even if Smith was put through the wringer again.  ‘Deadeye’ has left me wanting, no make that needing more books in the Detective Sergeant Smith series.  Knowing Stewart as I do, I am sure that I won’t have too long to wait.  I wholeheartedly recommend this book, this series and all of Stewart’s books to other readers.  The score on the Ginger Book Geek board is a very well deserved 5* out of 5*.