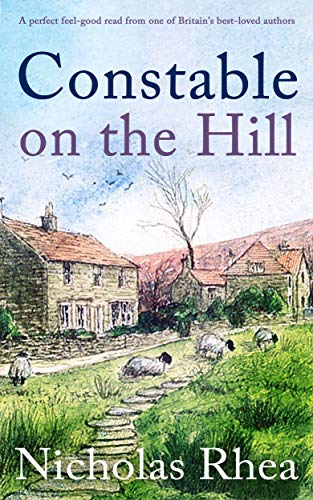 Policeman Nick Rhea has been posted to the country with his wife Mary and their three small children. They move into the police house, high on a ridge overlooking the moors. It sits on the edge of the village of Aidensfield — “probably the most beautiful site in the country”.

In the beautiful North Yorkshire countryside of the 1960s, Constable Nick’s roles are as varied as the eccentric villagers.

He handles every encounter with his characteristic humour, humanity and professionalism.

His investigations include the case of a clever pony who keeps escaping, a woman running through town naked, and a pack of Canadian timber wolves hanging out in a bus shelter.

He soon gets to know all the characters on his beat, from his superior officer Sergeant Blaketon to Claude Jeremiah Greengrass, whose lurcher Alfred lands him with a summons for “allowing a dog to worry livestock on agricultural land.” The ever-resourceful Claude Jeremiah offers the defence that Alfred’s victim, a budgie, cannot be described as livestock!

I have been a big fan of the television series called ‘Heartbeat’, which was inspired by the bestselling ‘Constable’ books released by Nicholas Rhea, for about 20 or so years.  I still watch the repeats of ‘Heartbeat’ on ITV3 of an afternoon.  I discovered the television series first and then decided that I would read the books that inspired the show.  The books are slightly different to the television series but both are equally as enjoyable.  I recently re-read ‘Constable On The Hill’ and I thoroughly enjoyed every single minute of it but more about that in a bit.

I absolutely love the cast of characters in this book.  I have a bit of a soft spot for Sergeant Blaketon and Claude Jeremiah Greengrass.  After having watched the show for so long, as I read the books I imagine the actors who played the respective characters in the show as I imagine the scene playing out in my head.  Blaketon is a bit of a stickler for rules and regulations and he had a long standing rivalry or  grudge fest against Greengrass, who was a loveable rogue.  Each would try to outmanoeuvre the other in a sort of game of ‘cat and mouse’.  I found their shenanigans to be quite amusing at times and more than once I ended up chuckling away to myself.

It didn’t take me long at all to get into ‘Constable On The Hill’.  In fact as soon as I started reading that was it, I was transported back to 1960s North Yorkshire and I just couldn’t stop reading.  I couldn’t turn the pages quick enough as I was waiting for the first appearances of my favourite characters.  I was enjoying the book so much that I lost all track of time and I lost track of just how quickly I was getting through the story.  I reached the end of the book far quicker than I had wanted to, which I had mixed feelings about.  Don’t get me wrong I was pleased to finish because it meant that I knew how this first ‘Constable’ book concluded but I was enjoying the author’s writing style, the characters and the storylines so much that I just wish the book could have been longer.

As with all of Nicholas’s books, I was drawn into this one from the first word on the first word on the first page.  Nicholas uses such vivid and realistic descriptions that I literally felt as though I had borrowed  Dr. Who’s Tardis and I was transported back in time to 1960s North Yorkshire with all the relevant sights, sounds, cars, characters and the pre-decimalisation currency.  A true step back in time.  I felt as though I was part of the story myself.

The ‘Constable’ books especially appealed to me because my great grandfather was born in the same sort of area as the books are set.  I never knew him as he died long before I was born but reading books such as these help me gain a better level of understanding of the environment in which he lived and the people he lived amongst.

In short, I thoroughly enjoyed reading ‘Constable On The Hill’ and I would definitely recommend it to other readers.  I will certainly be reading the rest of the ‘Constable’ series just as soon as I can.  The score on the Ginger Book Geek board is a very well deserved 5* out of 5*.