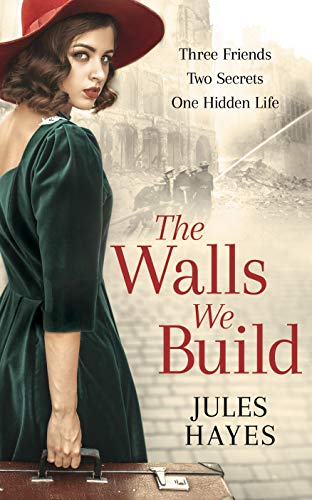 Growing up around Churchill’s estate, Frank, Florence and Hilda are inseparable, but as WW2 casts its menacing shadow their friendships become more complex and strained. Following Frank’s death in 2002, Florence writes to his grandson, Richard, hinting at a dark past.

On investigation, disturbing secrets come to light that have not only haunted his grandfather’s life but will now impact on Richard’s too. When a pivotal encounter between Frank and Churchill is revealed and a mystery relative in a psychiatric hospital discovered, just how much more does Florence dare disclose, and is Richard ready to hear?

I read the synopsis for ‘The Walls We Build’ and the story appealed to me in a few different ways.  I absolutely love historical fiction and I love the idea of people becoming amateur detective to either prove or disprove old family mysteries and legends.  I couldn’t wait to start reading and so without further ado, I grabbed a cup of tea, settled down and started to read.  ‘The Walls We Build’ was certainly an emotive read and then some.  I thoroughly enjoyed reading ‘The Walls We Build’ but more about that in a bit.

The cast of characters in this book was wide and varied.  The main focus of the story is on the lives of Hilda, Frank and Florence.  All three of the aforementioned characters were friends from an early age but for one reason and another things didn’t work out and the friendships sort of became very brittle.  Hilda and Frank married each other but I got the impression that their marriage had not been altogether happy and that by the end they sort of resented each other.  Hilda was a woman, who had her problems and who had her demons.  Frank was a complex character, who also had his problems and he spent a lot of time trying to cover up his own unhappiness.  I found Florence to be altogether more likeable.  She is fun, feisty, kind and compassionate and she often puts the happiness of others before her own.  What happened to weaken the friendships?  What secrets are they hiding?  Well for the answers to those questions and so much more you are just going to have to read the book for yourselves to find out as I am not going to tell you.

Oh my goodness me, ‘The Walls We Build’ was definitely an emotive read and then some.  To say that reading ‘The Walls We Build’ was addictive, is a huge understatement.  Whilst I was reading this book I found it almost impossible to put this book down for any length of time.  I just became so wrapped up in the story that I found it extremely difficult to tear myself away from the lives and loves of Frank, Hilda and Florence.  I had my own suspicions as to what was going to happen or what the secrets were that they were trying so hard to keep hidden, and of course I had to keep reading to see if I was going to be proved right or not.  I did guess some of the secrets but not all of them.  The pages turned increasingly quickly as my desperation to find out what happened grew and grew.  All too quickly I reached the end of the story and I had to say goodbye to Frank, Hilda and Florence.

‘The Walls We Build’ is superbly written.  The author has one of those writing styles that is easy to get used and easy to get along with.  She draws you in from the first word on the first page and she then takes you on one hell of an emotional journey through different time periods and different generations.  I love the way in which the author has combined fiction with fact and how she has incorporated historical figures into the story.  I especially love the scenes at Chartwell involving the Churchill family.  The story is written using two different timelines.  The first timeline deals with events as they happened back in the first half of the Twentieth Century and the second timeline follows Frank & Hilda’s grandson in the early part of the Twenty First Century as he tries to piece together the mystery surrounding his grandparents.  I did wonder if this way of telling the story would prove to be a bit confusing but I needn’t have worried because the two timelines interlinked really well and the story flowed seamlessly as a result.

In short, I adored reading ‘The Walls We Build’ and I would definitely recommend it to other readers.  I will definitely be reading more of Jules’ work in the future.  The score on the Ginger Book Geek board is a very well deserved 5* out of 5*.