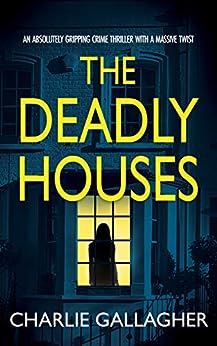 Eighteen months ago, a young boy cowers downstairs as the police try to stop his father from brutally assaulting his mother.

Now that man and three other domestic abusers have banded together to get revenge on the people they blame for taking their families away.

A ring of brutal men working together against the police. And they have someone on the inside.

I have been a fan of Charlie’s books for a little while now.  I love the way in which he writes hard hitting, crime novels that have an added authenticity to them when you consider the fact that Charlie is actually a serving police officer himself.  I have read, reviewed and loved every single book that he has written to date.  I read the synopsis for ‘The Deadly Houses’ and it certainly sounded like another amazing read from Charlie.  I was spot on because ‘The Deadly Houses’ was a fantastic book, which I thoroughly enjoyed but more about that in a bit.

I loved the character of Detective Sergeant Maddie Ives and took to her from the start.  In fact by the time I got to the end of the first couple of chapters I felt that I had reunited with an old friend in Maddie.  Maddie is a feisty and tenacious young woman.  She is also a dedicated police officer, who is a bit like a dog with a bone when she is allocated a case.  By that I mean that she will not rest until she has investigated every clue, chased down every lead and apprehended the perpetrator.  Maddie comes up against a new police officer, who needs a refund from whichever charm school he went to because he obviously failed the course.  I ended up thinking that if Maddie didn’t sort him out then I would.  Maddie works closely with a small team, who seem to get on really well with each other and they each have the others’ backs.  The investigation as described in the synopsis is going to test Maddie and her team as they have never been tested before.  Will Maddie and her team apprehend the perpetrator?  Well for the answer to those questions and more you are just going to have to read the book for yourselves to find out as I am not going to tell you.

Oh my flipping word, ‘The Deadly Houses’ has to be my favourite book of Charlie’s to date.  As soon as I sat down and started to read, that was it.  I was immediately drawn into the story and I found it impossible to put my Kindle down.  There was that much going on that I feared missing out on something if I had put the book down.  My Kindle wasn’t exactly glued to my hand but it might as well have been because it travelled everywhere with me.  The more of the story I read, the quicker the pages seemed to be turning and the more desperate I became to find out how the story concluded.  I soon worked my way through the book.  All too quickly I reached the end of the story and I had to bid farewell to Maddie Ives and her team.

‘The Deadly Houses’ is superbly written but then I have come to expect nothing less from Charlie Gallagher.  As I indicated above the fact that Charlie is a serving police officer means he can draw on his own experiences and put some of them in his books.  Charlie certainly knows how to grab your attention from the start and he draws you into the story.  For me , ‘The Deadly Houses’ started with a bang, hit the ground running and maintained a fast pace throughout.   He takes you on one hell of a scary and unpredictable rollercoaster ride through a complex investigation. There were more twists and turns than you would find on a ‘Snakes & Ladders’ board.  Just when I thought that I had figured out who was doing what and why then Charlie threw the odd curveball in to send me down another path entirely.

In short, I absolutely flipping well loved reading ‘The Deadly Houses’ and I would recommend this book to other readers.  I will certainly be reading more of Charlie’s work in the future.  The score on the Ginger Book Geek board is a very well deserved 5* out of 5*.