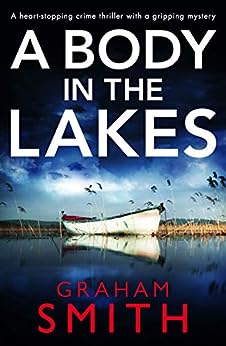 The woman’s limbs were so thin; the skin on her arms as translucent as tracing paper. Around her neck lay a faint string of purple bruises. In one so frail, darker, angrier marks might be expected but Beth knew the bruising would have stopped the moment her heart stopped beating.

When a hiker finds the body of a woman by the shores of Lake Ullswater, the police are put on high alert. Felicia Evans was known to be a tough character, but who would have strangled her?

As Beth begins tracking down witnesses, the team receives an anonymous letter claiming the charming mayor of Carlisle is behind the murders. There’s pressure from the top to clear his name. But Beth is determined to find the truth no matter whose feathers she ruffles in the process.

Beth knows the clock is ticking. The killer is hunting again. And it’s down to her to find who’s responsible before another woman becomes his prey…

Detective Constable Beth Young is an ambitious and determined young detective.  She yearns to move up the ladder as it were and she is a bit like a sponge in that she absorbs as much information as she can, whilst learning the ropes from her more experienced colleagues.  Beth also has a keen eye for detail and she has an almost always accurate gut instinct.  Beth has a way of getting the information out of suspects and witnesses that others don’t.  She certainly isn’t afraid to ask the difficult questions.  DC Young doesn’t need to think twice about rushing to the aid of somebody in trouble or to put herself in the way of danger.  If I had one teensy weensy criticism of her it is that she often rushes into situations without thinking what she is doing.  That said, I did take to Beth from the start and by the end of the first couple of pages I felt as though I had been reunited with an old friend.

‘A Body In The Lakes’ is one hell of a seriously well written and well plotted book that had me on the edge of my seat and kept me guessing throughout the book.  I picked up the book at an ideal time for me because I needed a distraction from certain health issues that I have.  It was definitely a distraction and half  and it certainly took my mind away from the trial spinal cord stimulator that I had just had fitted.  I became so wrapped up in the story and in the investigation that I just forgot the pain I was in, which is a bonus.  I became hooked on this book from the moment I read the synopsis, never mind from when I began to read the book itself.  I lost all sense of time whilst reading this book.  In fact the world could have ended whilst I was reading this book and I wouldn’t have noticed.  I picked the book up only intending to read the first couple of chapters but half a dozen chapters later, I was still sat there reading.  I just found it impossible to put the book down and it came everywhere with me.  I just had to keep reading to find out how the investigation concluded and to see if the guilty party was apprehended.  Reading this book was much like being on a very unpredictable and at times scary rollercoaster ride with not much of an idea in which direction the story will take you in next.  There were also more twists and turns to this story than you would find on a ‘Snakes & Ladders’ board.  On more than one occasion I thought that I had figured out what was what and who did what, only to realise that I had the complete wrong end of the stick and I was sent down another path entirely.

Graham Smith has one of those clever and descriptive writing styles that grabs you by the throat (not literally but you get the picture) and doesn’t let you go until you have finished reading.  He writes the story so clearly, cleverly and realistically that I felt as though I was part of the story myself.  The characters are so well described that they seemed to jump off the page and come to life.  I began to think of them as real and I couldn’t help but feel that there were some characters that needed a slap and others that just needed a hug.  I know, I know I get far too involved in fictional novels but if I enjoy a book, I am convinced by the writing and I am loving the story then I began to ‘live’ the story as if it is real.  That’s just the way I am.

In short, I thought that ‘Death In The Lakes’ was good but in my opinion ‘A Body In The Lakes’ is even better and blows the first book out of the water (pardon the unintended pun).  This is one series that is just going to keep getting better and better.  I can’t wait for the next book in the DC Beth Young series, I just hope that we don’t have too long to wait.  Graham Smith is one author that you certainly don’t want to miss.  I would definitely recommend Graham and his books to other readers.  The score on the Ginger Book Geek board is a very well deserved 5* out of 5*.