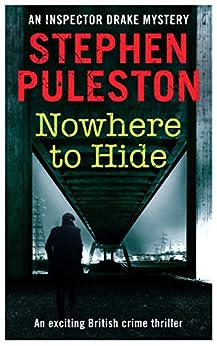 When drug addict Dawn Piper is found dead in her own home, her neighbours are far from surprised. Dawn’s habit led her to mix with some dangerous people. But this quiet mother of one was small fry …would anyone want Dawn dead?

Inspector Drake knows there is more to Dawn’s murder than a simple drug deal gone wrong. As he digs deeper, he discovers that Dawn hoped to clean up the streets of her community that are being overrun by drugs and the dangerous County Lines gangs that sell them. And it cost her her life. Have the police force failed the community they serve?

Drake is used to the murky world of organised crime groups. He knows the dirty games they play to evade arrest. But in his toughest case to date Drake is determined to make the guilty pay.

This time, they will have nowhere to hide”

I have been a fan of Stephen’s for a while now but silly me had forgotten just how good Stephen’s books are.  However, after reading ‘Nowhere To Hide’ I have reminded myself how good an author Stephen is.  I thoroughly enjoyed ‘Nowhere To Hide’ but more about that in a bit.

What can I say about Detective Inspector Drake?  Quite simply, he is a brilliant detective.  He is hardworking, methodical, tenacious, determined, stubborn, compassionate, sensitive, well mannered and he always treats people with respect even if they don’t always deserve it.  Drake is quite diplomatic at times and if there’s a tense situation, you can bet your bottom dollar that he will diffuse it.  Drake’s personal life seems a bit more settled now and he is currently in a relationship with a lovely sounding woman.  Drake is a different kind of police officer in that he has a mental health condition and he doesn’t keep it hidden.  Drake has Obsessive Compulsive Disorder.  Okay so Drake doesn’t exactly shout it from the rooftops but if anybody asks, he tells them.  Drake knows what can trigger a worsening of his OCD symptoms and he tries to minimise the risk of that happening.

Oh my word, I soon got into ‘Nowhere To Hide’ and in my opinion, it really is an unputdownable book.  Once I picked the book up, I couldn’t put it down.  I would start reading the book, only intending to read a couple of chapters but I would still be sat there over half a dozen chapters later.  I binge read the book over the course of a day.  I lost track of time whilst I was reading this book.  I thought that I had only been reading for a couple of hours but when I looked up to check, I realised that I had actually been reading for four hours.  I was enjoying the story so much that reading it was a pleasure and not a chore.

‘Nowhere To Hide’ is superbly written but then I wouldn’t expect anything else from the hugely talented Stephen Puleston.  He certainly knows how to grab your attention from the start and once he has that attention, he keeps it throughout the story.  The story was gripping and at times I was on the edge of my seat.  The book isn’t hugely fast paced but I don’t think that matters in this case.  The story is a bit of a slow burn, but the pace ramps up and leads to a tense and dramatic conclusion.  The author uses such powerful and vivid descriptions that I really did feel as though I was part of the story myself.  He has created such realistic and believable characters that they seemed to leap off the page and spring to life as it were.  I began to think of them as real.  Most of the characters didn’t irritate me so much but in the case of a particular character I wanted to jump inside the pages of the book to slap him silly with a wet flip flop.  I admire the fact that Stephen has created a character with a disability but he has shown that disabilities don’t need to hold you back and it is possible to function well in everyday life.

In short, I thoroughly enjoyed ‘Nowhere To Hide’ and I would definitely recommend it to other readers.  Stephen has done it again and written one hell of a book, which is destined to soar to the top of the bestsellers list and that is nothing less than he deserves.  I can’t wait to read what Stephen comes up with next.  Here’s hoping that I don’t have too long to wait.  The score on the Ginger Book Geek board is a very well deserved 5* out of 5*.