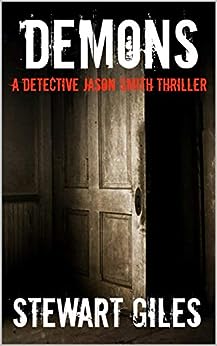 ‘Forgive me father, for I have sinned.’

Someone is killing people in York. All of the victims share a secret that the murderer is somehow aware of and all of them receive an identical message after they are killed.
‘God has forgiven you your sins, but He could not rid you of your demons. So I have taken them for you.’

Detective Sergeant Jason Smith heads up the most draining investigation he’s ever come across. Coming face to face with demons of his own, will this be the case that finally sends Smith over the edge?

I have been a fan of Stewart’s work for what feels like quite a while now.  I have read and loved his most recent books, whilst at the same time trying to catch up on his earlier work.  I read the synopsis for ‘Demons’ and it sounded like one hell of a fantastic read.  I couldn’t wait to get my hands on a copy and see what challenges DS Jason Smith had to face.  I thoroughly enjoyed reading ‘Demons’ but more about that in a bit.

I must admit that I have developed something of a soft spot for DS Jason Smith.    DS Jason Smith is originally from Australia but he moved to the United Kingdom to live with his beloved Grandmother.  There had been a family tragedy in Australia and it was felt that Jason would be best off leaving.  He feels like one of my own family- well I have got a cousin called Jason, who lives in Australia and the surname Smith features fairly prominently in my own family tree so I am a wee bit biased.  DS Jason Smith is one tough cookie but then he has had to be.  He has faced many challenges but he has done so with nerve and courage.  Smith is a Detective Sergeant although he is reluctant to go any higher up the career ladder.  Smith is married to DC Caroline Whitton and they have a daughter together.  Smith and Whitton work together on the same team.  Smith is in charge of a small team and he leads from the front.  He wouldn’t ask anybody to do anything that he wouldn’t be willing to do himself.  He often takes on more than his fair share of the workload.  Smith does have a tendency to push the self destruct button when things are going well for him.  It’s as if he can’t accept that things are going well for him and that he deserves to be happy.  ‘Demons’ sees Smith face one of the toughest challenges of his life.  Will Smith survive or will this latest case tip him over the edge?  Well for the answer to that question and so much more you are just going to have to read the book for yourselves to find out as I am not going to tell you.

It’s no word of a lie when I say that this has to be my favourite of Stewart’s books to date.  As soon as I started to read that was it, I just knew that I would have to cancel my plans for the rest of the day (not that I had any) as I wouldn’t be able to put ‘Demons’ down.  The book wasn’t exactly glued to my hand but it might as well have been because it travelled everywhere with me.  The book had clearly developed a hold over me and it wasn’t a hold that I was willing to break.  It was as if I feared missing out on some vital clue or on a nugget of gossip.  The pages turned increasingly quickly as my desperation to find out how the story concluded steadily grew and grew.  I flew through the book and I was disappointed to reach the end of the story as it meant that I had to say a temporary goodbye to DS Smith.

‘Demons’ is brilliantly written but then I think that all of Stewart’s books are simply brilliant.  He certainly knows how to grab your attention from the start and he doesn’t let your attention wander until the moment you close the back cover of the book as it were and the story is finished.  The crimes as featured in this book are rather gruesome in nature but I think that is one of the reasons why this book will stay fresh in my mind for a long time to come.  For me the book was perfectly paced.  The story hit the ground running and maintained the pace throughout.  Stewart certainly puts his characters through the mill and then some.  Just when you thought that things couldn’t possibly get any worse for the characters then Stewart makes them go through more tragedy, stress and upheaval.

Reading ‘Demons’ felt like being on one of the scariest and most unpredictable rollercoaster rides ever. There were more twists and turns to this story than you would find on several ‘Snakes & Ladders’ boards.   I felt myself go through the whole range of emotions with all the highs, lows, ups and downs, happiness and sadness and well you get the picture.  Just when you thought that the action had settled down and you could reclaim your stomach, catch your breath and take a breather then off the action would go again.  There were times where I was almost too scared to turn the page or to keep reading but then I reminded myself that if I wanted to know how the story concluded then of course I had to read on.   If you want a fast paced, gritty, gruesome, realistic story that will get your adrenaline flowing, make your heart beat that bit faster and will send your blood pressure rocketing then ‘Demons’ is the book for you.

In short, I thoroughly, totally and utterly flipping well loved reading ‘Demons’.  Stewart Giles has done the impossible and he has raised the bar with this book.  The series featuring DS Jason Smith just goes from strength to strength and gets better and better.  I would definitely recommend this author and his work to other readers.  I can’t wait to read more of Stewart’s books in the future.  The score on the Ginger Book Geek board is a very well deserved 5* out of 5*.

One thought on “‘Demons’ by Stewart Giles”