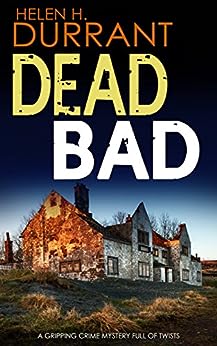 Detectives Calladine and Bayliss face a vicious serial killer in a mystery with a shocking ending.

A woman’s body is found in a disused church, a homemade stuffed toy by her side. The victim had been dumped there months ago. The crime has the hallmarks of twenty-year-old case whose alleged perpetrator is in prison.

Detective Ruth Bayliss must work out whether a serial killer has returned, or if a new killer is just taunting the police.

Her partner DI Tom Calladine faces the fight of his life to clear his name of corruption accusations. And then things go from bad to worse for Calladine . . .

With the team under massive pressure and drugs flooding the streets, another gruesomely presented body is found.

In an ending with a huge twist, the detectives must unpick decades’ old lies before anyone else dies.

Oh my where do I start with this book?  I don’t mean that in a bad way but in a good way.  There were several story strands to this book that were equally as good as each other and it would be wrong to just pick out one.  In case you hadn’t guessed I absolutely flipping, totally and utterly loved reading this book but more about that in a bit.

I really do love the detective pairing of Calladine and Bayliss.  In a way they are like brother and sister.  Each is in tune with what the other one is thinking, each one worries about the other one if he/ she hasn’t heard from the other one in a while, each would never believe badly of the other one and each has the other one’s back.  Both detectives are well respected by their team and the team works really well as a result.  I must admit that I feared for Calladine’s safety at the beginning of the book.  I won’t put too much detail down as I don’t want to give too many spoilers away but needless to say that Calladine faces a life or death struggle.  I had taken to his character that much that if I could have jumped into the pages to ride to Calladine’s rescue myself then I would have done, whilst slapping some of those responsible silly with a wet flip flop.  Calladine would be the first to admit that he isn’t perfect and what you see with him is very much what you get.  I get the impression that Bayliss is feeling torn in this book.  Her partner has had a very good job offer in another place down south and she sort of wants to go with him because it would be a fresh start but at the same time I don’t think that she can face the idea of moving away, leaving Calladine and the rest of the team behind.  It was interesting to see the kind of internal battle that she was having.  Bayliss would also like to go for promotion at some point.  Bayliss takes on the case of a young woman, whose body was found in horrific circumstances in a church.  There are very few clues and it seems that no matter which way they turn they hit a brick wall.  Bayliss is determined though and she resolves to do her best for the dead woman and ensure that her murderer or murderers are brought to justice.  Will Calladine survive to the end of the book and beyond?  Who wants to hurt him so badly and why?  Will Bayliss say goodbye to Calladine and move down south or will the pull of her boss and the team be too great to deny?  Will Bayliss & Calladine be able to solve the horrific murder of the young woman in the church?  Well for the answers to those questions and more you are just going to have to read the book for yourselves to find out because I am not going to tell you.

Whenever you pick up a book written by Helen H. Durrant, you are guaranteed one hell of a rollercoaster read and this book was no exception.  Blimey oh riley I was hooked on this book from the moment I picked it up and began to read.  The book certainly hits the ground running and maintains the pace throughout.  The story started in such a way that will remain fresh in my mind for a long time to come and will set it apart from other books.  I binge read this book in two sittings and believe me when I say that the time and the page numbers flew by in a blur but because I was enjoying the story so much and I had taken to the characters so well, I didn’t realise how quickly I was finishing the book until I had cleared over 40 %.  ‘I felt torn over ‘Dead Bad’ in that is was such a good book that I wanted to read it non-stop but at the same time it was such a good book that I just wanted to pace myself and stretch the story out for a bit longer.  I became totally immersed in the story and in the characters and I found myself getting carried away.  By that I meant that I began to shout rude words at the book, argue with certain characters or I wanted to hand out my own brand of justice.  I know, I know it’s just fiction but I find that a sign of a good book is that you feel part of the story and part of the investigation.  I literally felt as though I was part of the investigating team.  ‘Dead Bad’ took me through a wide range of emotions from hope to despair, happiness to sadness and well you get the picture.  There were also some moments where I almost had to read through my fingers or I was afraid to turn the page as I genuinely feared what was going to happen next to characters, who seemed so real to me that they were almost my friends- all except the nasty pasties who were trying to hurt Calladine that is.

‘Dead Bad’ is the eighth book in the series featuring Detectives Calladine and Bayliss.  It works perfectly well as a standalone but because I am a bit OCD I would advise that you read the series in order and from the beginning.

In conclusion, and if you haven’t already guessed, I absolutely, totally and utterly one hundred percent loved everything about this book.  I would strongly recommend this author and her books to anybody and everybody.  I can’t wait to read what comes next from this author.  The score on the Ginger Book Geek board is a well deserved 5* out of 5*.

One thought on “‘Dead Bad’ by Helen H. Durrant”