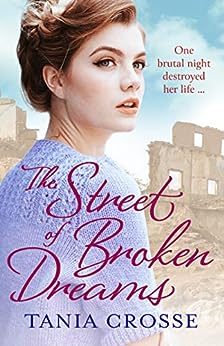 Summer 1945. The nation rejoices as the Second World War comes to an end but Banbury Street matriarch, Eva Parker, foresees trouble ahead.

Whilst her daughter, Mildred, awaits the return of her fiancé from overseas duty, doubts begin to seep into her mind about how little she knows of the man she has promised to marry. Or are her affections being drawn elsewhere?

Meanwhile, new neighbour, dancer Cissie Cresswell, hides a terrible secret. The end of the conflict will bring her no release from the horrific night that destroyed her life. Can she ever find her way back?

Under Eva’s stalwart care, can the two young women unite to face the doubt and uncertainty of the future?

When I accepted the kind invitation to participate in the blog tour for ‘The Street Of Broken Dreams’ I didn’t realise that it was actually the second in the Banbury Street series.  After having read it, I can’t wait to get hold of a copy of the first book in the series called ‘The Candle Factory Girl’ to catch up on what I have missed.  I thoroughly enjoyed reading ‘The Street Of Broken Dreams’ but more about that in a bit.

I really took to the strong female characters in this book.  Eva Parker is the matriarch of the street.  She is kind, loving, loyal, compassionate and she will not hesitate to stand up for herself and those she loves.  I loved the bit where she stands up to the snobs and reminds them that she is just as good as they are.  She is incredibly supportive of her daughter Mildred, who is engaged to a man, who is currently fighting overseas.  I did wonder if she was having doubts about getting married to a man that she feels she barely knows.  I did also wonder if she was having her head turned by somebody else.  Both ladies are incredibly curious about their new neighbour called Cissie Cresswell.  She is a bit of a mystery at first.  What Eva and Mildred don’t know is that Cissie was the victim of a very traumatic event and it has changed her life- but not in a good way.  Eva takes Cissie under her wing and by the end of the book Eva thinks of Cissie like another daughter.

If there’s one thing this Ginger Book Geek loves, it’s discovering new authors and Tania Crosse is certainly a new author to me, even though I have a couple of her books on my ‘To Be Read’ mountain.  Judging by how much I enjoyed this book, I can guarantee that they won’t be on that mountain for much longer.  If there’s another thing this Ginger Book Geek likes, it’s historical fiction and especially sagas set during the Second World War.  I am fascinated by both World Wars, which is in part due to the fact that I didn’t know my grandparents.  I know it might sound silly to some but by reading books such as these I feel closer to them in some way and I feel that I have a better understanding of the conditions in which they had to live and what they went through.

Oh my goodness me, ‘The Street Of Broken Dreams’ really did tug on my heartstrings from the moment I started to read until the moment I finished the book.  The author has a writing style that really draws you into the story and the characters seem so realistic that they just seem to come alive and jump off the page as it were.  That’s what happened to me anyway.  By the time I got to the end of the book, I felt like Eva, Mildred and Cissie were true friends and I could imagine sitting down for a gossip and a cup of tea with them.  I felt myself growing very defensive and protective of all three ladies.  If I could have jumped inside the pages of the book to sort out who was upsetting them then I would have.  I found I shared all the emotions that the ladies experienced- what they went through, I went through.  I felt as though I had been on an emotional rollercoaster by the time I finished the book.  I became addicted to the story from the bottom of the first page and even more so when I learnt just what horrors Cissie faced.  I just had to keep reading to see if she got justice and to see if she managed to rebuild her life.  The pages turned over with increasing speed and I didn’t notice how quickly I was getting through the story until I happened to look up.  I was stunned to realise that I had got 30% of the way through the book.  I was so caught up in the story, the characters and their lives that I totally immersed myself in their world and I didn’t notice either the time passing by or the rate at which the pages were turning. .

In short, I thoroughly enjoyed reading ‘The Street Of Broken Dreams’ and I would definitely recommend it to other readers.  I will definitely be reading the first book in the series just as soon as I can.  I can’t wait to read what Tania Crosse comes up with next.  The score on the Ginger Book Geek board is a very well deserved 5* out of 5*.