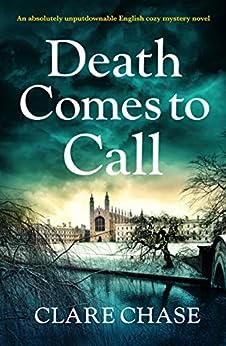 Frost sparkles on the bare winter branches, as night falls over the quiet country lanes bordering the fens. But nestled beneath an ivy-covered bough, a body lies pale in the bright moonlight…

When a promising local artist disappears, the victim’s brother begs Detective Tara Thorpe to take the case. It seems there’s no evidence of foul play… he simply disappeared without a trace.

Tara agrees to do some digging… never mind that her unorthodox approach to policing has got a few of her colleagues’ backs up. Amongst them is her former supervisor Detective Patrick Wilkins… he’s had enough of Tara calling the shots and will do anything to knock her down. She must be careful.

At least she has an ally in their boss, Detective Garstin Blake. He’ll always back her hunches. If anything, they work together too well… at least, that’s the rumour around the station these days.

When a body of a young woman is found frozen near the fens, Tara’s evidence suddenly becomes key to solving a high-profile murder. Is their missing artist still a victim… or in fact a clever murderer with a deadly plan?

I have to say that I love the character of Tara Thorpe.  She used to be a journalist but she took the decision to leave journalism behind and join the police force.  She has taken to being a police officer as easily as a duck takes to water.  She has brought her journalistic instinct with her and she can easily tell if somebody is lying or not telling the full story as it were.  If something doesn’t seem right to her then she will not hesitate to investigate further until her curiosity has been satisfied or until all avenues of investigation have been exhausted.  With Tara, a case is never closed and it never goes down as cold.  Tara also knows all the tricks that journalists can use and she puts this knowledge to good use.  Tara has the respect of most of the people she works with although she has made enemies too but then you get enemies in all walks of life.  At the moment Tara is unattached but she has developed feelings for one of her bosses and it would appear that the feelings are mutual, although her boss’s pregnant wife is still around which certainly complicates matters.

I was hooked on this book from the moment I picked the book up and began to read.  By the time I got to the bottom of the first page I felt as though I had been reunited with old friends.  The author grabbed my attention from the start and she reeled me in as it were.  I picked the book up only intending to read a couple of chapters but 9 chapters later I was still reading.  For me ‘Death Comes To Call’ was simply unputdownable.  It wasn’t exactly glued to my hands but it might as well have been because it came everywhere with me.  The author’s writing style certainly made me want to keep reading.  She writes so vividly that I really did feel as though I was part of the investigation myself and Tara’s investigative partner.  I did find that I tried to interact with the book in the sense that I was so caught up in the story that I began to ‘live’ it as if it were real and I found that I was giving Tara tips on how to progress the investigation and who I thought was telling fiberoonies.  I smugly thought that I had worked out who was the guilty party, only to realise that I had the wrong end of the stick.

In short, I absolutely adored reading ‘Death Comes To Call’.  I would definitely recommend this author and her books to other readers.  I can’t wait to read more from Clare Chase.  Here’s hoping that we don’t have too long to wait.  The score on the Ginger Book Geek board is a very well deserved 5* out of 5*.