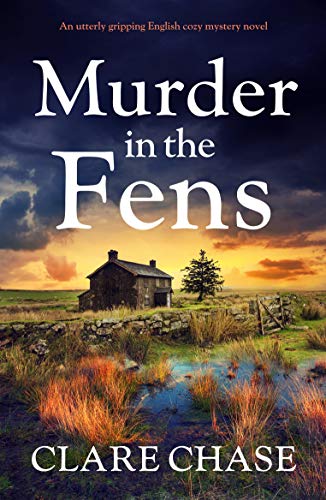 When the body of twenty-year-old Julie Cooper is found – her pockets stuffed full of wilting flowers – in an iron-age hill fort on the edge of the fens, Detective Tara Thorpe and her team are called in to investigate. The evidence points to an illicit affair gone wrong… but is there more to the story?

As always at the Cambridge constabulary, the case turns personal. Detective Blake is exhausted after the arrival of a new baby with wayward wife Babette, and Tara is keen to put as much distance between herself and Blake as she can – both at the station and on the hunt for the killer. Charming rookie officer Jez is the perfect distraction… but is he a little too good to be true?

Then Tara makes a startling breakthrough when she finds an unsettling family heirloom hidden in the late victim’s bedroom – a golden statue of a sinister-looking cat with emerald eyes. As she traces its origins, Tara begins to realise that Julie’s murder is no one-off crime, but a sinister plot with its roots in a terrible secret that was covered up decades earlier.

What can I say about Detective Tara Thorpe?  Well she is feisty, determined, occasionally very stubborn, thorough, hard working and she thinks that she is always right.  She works within a small team.  There’s a spark between her and Detective Blake and there’s a certain tension in the air.  Tara tries to put as much distance between her and Blake as is possible to avoid any unpleasantness.  I did warm to Tara but I can’t say that we would get along as friends- colleagues yes but friends no.  A dead student is found in suspicious circumstances in ‘Murder In The Fens’, which well and truly tests Tara and her team.  During the course of the investigation, secrets, lies and skeletons tumble well and truly out of the closet.  Will Tara and her team solve the case?  What happened that led to the murder of the student?  Well for the answers to that question and more you are just going to have to read the book for yourselves to find out as I am not going to tell you.

As usual, when you pick up a book written by Clare Chase, you know that you are in for one hell of a read and ‘Murder In The Fens’ is no exception.  ‘As soon as I started to read I felt as though I had been reunited with former colleagues and in some cases friends.  I became so wrapped up in the story that I didn’t notice how quickly the pages were turning or the time was speeding by.  It seemed to take me next to no time to march through the book.  Reading the book became an addiction and I constantly felt as though I was an addict in need of fix.  Every time I put the book down, I would immediately look forward to being able to pick the book up again.

‘Murder In The Fens’ is really well written.  The author certainly knows how to grab your attention from the start and she doesn’t let you go at any point during the book.  I felt like a captive- a happy captive. Clare has such a realistic writing style that I felt as though I was part of Tara’s team myself.  I found that I began to interact with the book in the sense that I would try giving the real detectives advice or try to conduct my own little investigation.  I know I get far too involved in fictional stories but I blame an overactive and vivid imagination.

In short, I thoroughly enjoyed ‘Murder In The Fens’, which incidentally is the last book in the series featuring Detective Tara Thorpe.  I would definitely recommend Clare and her books to other readers.  I can’t wait to read more from Clare and here’s hoping that we don’t have too long to wait for her next book.  The score on the Ginger Book Geek board is a very well deserved 5* out of 5*.