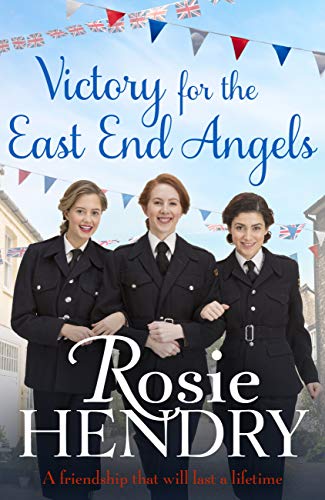 The war is almost over – and it’s up to the East End Angels to keep the home fires burning!

Frankie‘s fiance, a doctor, is away looking after the troops in Europe – will he return safely home?

Winnie has a happy secret – but can she carry on at Station 75 when she’s going to have a baby?

Bella is intrigued by her new friend, a Polish airman.

As the war ends and victory is in sight, what next for the girls of Station 75?

What can I say about Frankie, Winnie and Bella?  They are a lovely, lovely trio of young ladies who all work for the ambulance service out of Station 75.  They work together, socialise and depend on each other for support.  It sounds like they are more like sisters than friends.  I don’t really want to go through what happens to them in much detail because I would hate to give too many spoilers away and spoil the book for other readers.  What can I say is that Bella suddenly has a glint of happiness on the horizon after she went through an awful time following the tragic loss of her husband earlier on in the series.  What happens to the three young ladies?  Well you are just going to have to read this delightful book for yourselves.

‘Victory For The East End Angels’ has to be one of my top 5 reads of 2019.  It is a beautiful and sensitive story about how even in the toughest of times, people pull together to help each other out.  I was addicted from the moment I picked up the book, never mind from when I read the synopsis or when I started to read the book itself.  I am a bit (well ok a lot) of a history nerd and I love stories that are set during the Second World War.  As soon as I started to read the book, that was it.  Plans for the rest of the day were cancelled or rearranged and I just sat and read the book all afternoon.  I was so focused on the story that I lost all track of time and I didn’t realise just how quickly the pages were turning until I looked up to check how much I had read.  I was stunned to realise that I had been reading for four hours solid and I had read almost two thirds of the book.  All too quickly, I reached the end of the story and I had to say goodbye to the East End Angels, which was heart breaking in a sense because I knew that I wouldn’t be meeting them any more.  However, I have heard a little whisper that they might be mentioned in a future book in a future series.  Keep that under your hat though.

‘Victory For The East End Angels’ is brilliantly written but then I wouldn’t expect anything else from Rosie Hendry.  She has one of those writing styles that is easy to get along with and easy to get used to.  She draws you into the story and writes in such a way that you begin to think of the girls as your friends and you feel as though you are part of the story yourself.  That’s how I felt at any rate.  Rosie has a huge wealth of knowledge about the Second World War and this shines through in the quality of her writing.  Whilst reading this book I did feel as though I had borrowed the Tardis from Dr. Who and I had travelled back to Wartime Britain, which felt brilliant.  I know that’s a weird sort of thing to say but by going back to Wartime Britain I felt closer to my grandparents, who all died before I was born.  Reading books such as this, gives me a greater appreciation for the conditions under which they lived back then.  Anyway enough of my blathering so back to the review I do go.

I did feel as though I had been on an emotional rollercoaster ride whilst reading this book, with all the highs, lows and the feelings in between.  Everything that the Angels went through, I went through with them.  Ultimately though ‘Victory For The East End Angels’ left me with a smile on my face.

In short, as I mention above, ‘Victory For The East End Angels’ is a brilliant book and it is right up there on my list of Top 5 reads of 2019.  Rosie Hendry is right up there on my list of ‘drop everything to read their next book’ list of authors. I can’t wait to read what she comes up with next.  I would definitely recommend this author and her books to other readers.  This series would be perfect for fans of Ellie Dean and Nancy Revell.  Rosie Hendry is certainly on a par with them.  The score on the Ginger Book Geek board is a very well deserved 5* out of 5*.