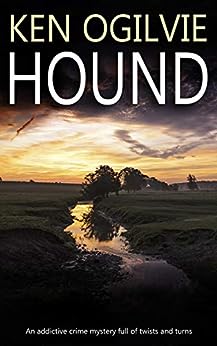 Rebecca Bradley put serial killer Jackie Caldwell in prison. She had the assistance of Hound, a giant young man who’s in love with Rebecca.

Then Jackie murders a prison guard and escapes. She heads north to her home town of Conroy, where she hides out in the forest to evade a massive police search.

She’s burning with hatred for Rebecca, and wants revenge for the financial ruin of her family twenty years ago in a goldmining scam by Rebecca’s villainous grandfather.

Hound pursues Jackie in a bone-chilling chase through the eastern Georgian Bay forest . He faces a race against time to save the woman he loves.

If there’s one thing that this Ginger Book Geek likes, it’s discovering a new author.  Ken Ogilvie is certainly a new author to me.  I read the synopsis for ‘Hound’ and it sounded just my kind of read.  I couldn’t wait to dive straight in.  I absolutely loved ‘Hound’ but more about that in a bit.

I absolutely loved the character of Detective Rebecca Bradley and took to her from the very beginning.  At the beginning of this book her arch nemesis Jackie Caldwell escapes from prison.  Rebecca helped to put Jackie in jail and Jackie also has a grudge against Rebecca for something that a member of her family allegedly did to a member of Jackie’s family.  Rebecca knows that Jackie will be on the warpath and intent on seeking revenge against Rebecca.  On the one hand Rebecca has an adrenaline rush at the thought of helping to track down an escapee but on the other hand she can’t help but fear for her own personal safety.  Not that she allows her fear to show on her face.  She is determined not to hide away.  She works well as part of a team but equally she works well on her own.  Rebecca is feisty, stubborn, diligent, hard working, kind, compassionate towards those who deserve compassion and hard on those who cause misery.

Oh my giddy aunt, ‘Hound’ was certainly a great read that had me gripped throughout.  This is one of those books that does what it says on the tin.  The tagline on the front cover says that it is an addictive crime mystery full of twists and turns and it most certainly is all of those things.  I was hooked on this book from the moment I began to read the first chapter and reading ‘Hound’ soon became an addiction.  I just couldn’t put the book down.  The book wasn’t exactly glued to my hand but it might as well have been because it came everywhere with me.  As the desperation to catch the escapee became more intense, so did my addiction to this book.  It didn’t seem to take me long at all to get through ‘Hound’.

‘Hound’ is very well written.  The story starts with a bang and in such a way that will remain fresh in my mind for a fair while to come.  The story hits the ground running and maintains the pace throughout.  Ken certainly knows how to grab your attention from the start.  Ken has one of those writing styles that draws the reader in and he uses such vivid descriptions that the reader actually feels as though they are part of the story themselves.  That’s how I felt anyway.  I became far too involved in the story and if I could have jumped inside the pages of the book to poke certain characters in the eye with a sharp stick then I would have done.

Reading ‘Hound’ was like being on an unpredictable and at times scary rollercoaster ride with not much of an idea in which direction the story is going to take you.  I smugly thought that I had fathomed out how the story was going to pan out but I soon realised that I had the wrong end of the stick and the story panned out very differently to how I had imagined it would.  There are also several twists and turns- some of which I guessed and some of which I didn’t guess.  The ones I didn’t guess had a similar effect on me as would a punch to the gut.

In short I absolutely loved reading ‘Hound’ and I will definitely be recommending it to other readers.  I can’t wait to read what Ken comes up with next but whilst I wait I will definitely be reading the first book in the series to feature Detective Rebecca Bradley, which is called ‘Her Dark Path’.  The score on the Ginger Book Geek board is a very well deserved 5* out of 5*.